Washing windows can be a thankless chore at home, and if you’ve seen window washers on scaffolding, it may seem terrifying at that scale. But some do-gooders have been executing a fun idea for patients at children’s hospitals around the country. Dr Oz knew of some kids who could use a few smiles, so he suited up for action to kick off #OzLaughterRx. 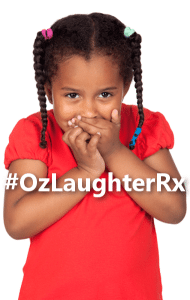 Dr Oz kicked off #OzLaughterRx by visiting a children’s hospital where superheroes washed windows for sick children. How can you make someone smile? (Gelpi JM / Shutterstock.com)

Dr Oz dressed as Superman and went to work with Alex as Batman and Julian as Spider-Man to clean windows while hanging off the sides of buildings. You can bet that the kids got a kick out of it!

Dr Oz as Superman chatted with 4-year-old Jude about his illness. He was paralyzed following an ear infection. Since Jude’s favorite superhero was Spider-Man, Julian was in the right place! Then Jude showed off his super power in arm wrestling by beating Superman in the challenge.

Dr Oz also met 9-year-old Luciana, who was being treated for Hydrocephalus after having a brain tumor removed. Then there was 5-year-old Le’onte, who has had various surgeries, including a bowel transplant, since birth. In addition to also beating Superman at arm wrestling, Le’onte pointed out a spot that the superheroes missed while cleaning the windows.

Back in the studio, Dr Oz reminded everyone that laughter is the best medicine. He hoped to start a movement and encouraged everyone to make someone laugh. You can share your own jokes, pictures, and stories on social media using the hashtag #OzLaughterRx.

Do you need to keep your brain sharp? Dr Oz shared a few brain teaser exercises in the form of illustrations.

One of the images showed the words “AID AID AID,” with an arrow indicating the first appearance of the word. If you guessed that this is First Aid, you are right!

Another brain teaser was the word “Dr.” in large print and the word “do” in small print. This was meant to indicate “Dr. Dolittle.” How do you like to exercise your brain?