If you’re a parent, grandparent, or have a teenager in your life that you care about, this episode is one you certainly need to pay attention to. Dr Oz wanted to share what you need to know about dangerous and potentially deadly social media trends that many teens have begun replicating. Montel Williams worked with Dr Oz to find out exactly what’s going on. First, Dr Oz looked purple drink, which is also known as “sizzurp” or “lean.” 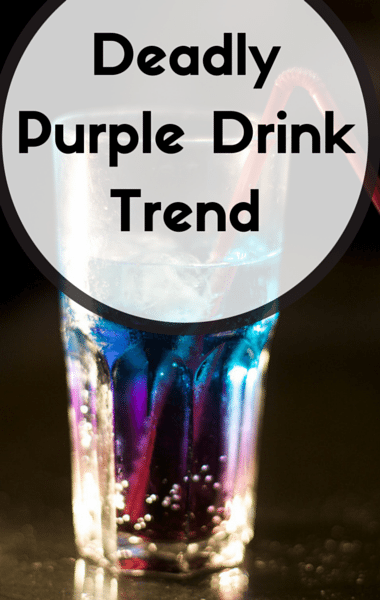 The drink has been glamorized by popular celebrities like Justin Bieber, Lil Wayne, and Chris Brown. It’s a dangerous mash-up of soda, candy, and cough syrup laced with codeine. Montel Williams stated that in this country, we only worry about the extremes like heroin or cocaine, while we ignore what’s in our own bathrooms. There are at least five artists with songs out about “sizzurp.” Our children are listening to those songs and paying attention to those celebrities.

Parents should be concerned about purple drink, because while it’s not marijuana or alcohol, it can easily harm or even kill your child. Just one teaspoon of the prescription cough syrup can be the same as one Tylenol 3, and teens are pouring half a bottle into a glass and mixing it with soda and candy. Because the cough syrup has an antihistamine in it, that speeds up the process in which codeine enters the body, with the potential to literally shut you down.

Montel argued that we have to start holding those who take advantage of the media to make money, more accountable for what they do to our children.

Allison is a young lady who became addicted to purple drink when she was just 15-years-old. She listened to a lot of rap and heard a lot of references to purple drink. She lived in a nice home in the suburbs, but she “had a fascination with the other side of the street.” When she drank “sizzurp” for the first time, she described the feeling as “loose” and “euphoric.” She shared that her parents were great parents who took precautions that included putting a lock on the liquor cabinet. But right in the fridge was a leftover bottle of cough syrup with codeine.

It started out as fun, but quickly became a huge problem. Anytime that she and her friends could get their hands on it, she drank the cocktail. There’s a company that has stopped making the dangerous cough syrup, but there’s still other companies producing it. Montel Williams said that one of those celebrities needs to explain why they think it’s okay to destroy a child like Allison. That, or they should put out the message that they’re an adult and need to send better messages.

Allison hit rock bottom after using purple drink for three years. It led her to harder drugs, to which she became addicted. She then became homeless, lost her child, and saw her life fall apart, all because she first started with the dangerous drink. Although Allison was able to eventually turn her life around, not everyone is that lucky.

Dr Oz showed a picture of a teen named Trey. He was 23-years-old when he died because of purple drink. Trey’s mom remembered him coming out of the house one time, being very itchy, repeatedly scratching at himself. She said to her fiance then, that Trey was clearly on something, but they didn’t know what. But on Thanksgiving in 2012, he told his grandma that he was having trouble with drugs. Before she really had opportunity to confront the issue, he passed away in his sleep. He simply stopped breathing as a result of the cough syrup.