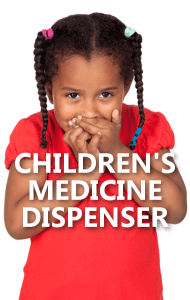 Tiffany Krumins lives in a small town in Georgia, where she was a nanny for a little boy with Down Syndrome. He got ear infections frequently and would be a sweet kid until it came time for the medicine dropper. He wouldn’t want to take the medicine. So Tiffany invented Ava the Elephant. Ava the Elephant is a toy that lets you put a medicine dropper full of medicine into her nose.

Then you press the button and Ava says, “1, 2, 3, open wide” and then she tells them, “Good job.” Tiffany said she tried this again and again on the hardest child out there. Mr. Wonderful wasn’t so sure it was a business, but Barbara Corcoran was very interested. She gave Tiffany her requested $50,000 for 55 percent of her business.

Dr. Oz: Turning a Product from a Dream into a Reality

Tiffany walked into the Shark Tank with a hand-molded prototype and an idea. Now, it’s turned into a huge business. Millions of parents caring for millions of kids have Ava the Elephant to help kids with medicine time.

Tiffany said the most rewarding part was emails she’s received from moms who are thankful for her product. Barbara said that there’s almost at $2 million in sales and they’re at 15,000 retail outlets, as well as selling well online.

This was the first product Barbara Corcoran ever invested in on the show. Barbara said that she invested because Tiffany is gorgeous and she “gets better looking when she’s with her.” More importantly, Barbara said Tiffany had passion and a great idea. Her product was also appealing to Barbara, who is a mother herself.

“I had been up in the middle of the night getting my kid to take the medicine. Those other sharks that missed out because they had trophy wives and had never been up a day in their life,” she said.

After that episode aired, Tiffany still had to do a lot of work. She said that she kept motivated because she cared for the kids she volunteered with, who were cancer patients, some of whom had to take 20 to 30 medications a day. Tiffany also got cancer after that episode, but she survived and she’s cancer-free. That further motivated her to push forward.

Ava the Elephant is now made in the U.S.A., which Tiffany said they fought very hard for. They also have a new version of Ava the Elephant that is sterilized for hospital use. They’re going to donate 1,000 Ava the Elephants to the same children’s hospital where Tiffany volunteered.