While discussing dangerous teen tends like purple drink with Montel Williams, Dr Oz and Montel then discussed racing fuel and Mountain Dew. It almost sounds too bizarre to be a real problem, but kids are actually drinking the dangerous mixture. Montel shared that back when he was in the military, he would always laugh when he heard about Russian pilots that would supposedly drink fuel, causing them to go blind. That was 30 years ago, so why now are kids putting their lives at risk in attempt to get high?

Teens drinking the dangerous mix just may be the most dangerous trend of them all. Racing fuel is a specialized gasoline with a very high methanol content and can be fatal if consumed. The mix has already taken two lives, including two 16-year-old Tennessee boys. The teens drank the mixture thinking they would get the same buzz as they got from alcohol, not realizing how deadly it was. J.D. fell into a coma and was given dialysis to try to flush out his system, but died days later. Both boys died from methanol poisoning. Since his passing, more teens have admitted to trying “dewshine.” 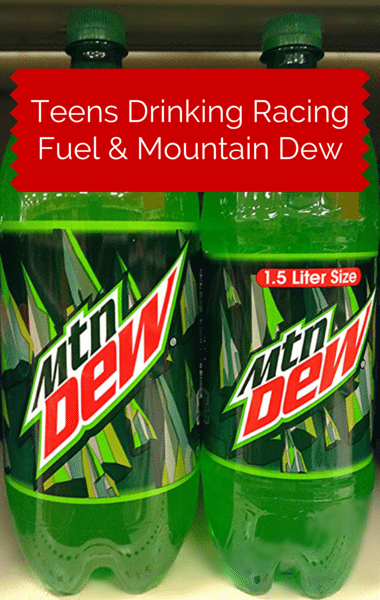 Dr Oz and Montel Williams took a closer look at a dangerous teen trend that has many drinking racing fuel and Mountain Dew, with potentially deadly results. (jeepersmedia / Flickr)

J.D.’s father and stepmother joined the show. They described J.D. as the average teenager who could fix anything, saying he was truly an “average kid.” It was about 5:00 in the evening when J.D. called his dad after his truck slid into a ditch. His dad thought he seemed normal overall, but recognized that something seemed off. He interrogated his son, who then told him he and his friend had been drinking wine. He thought it made sense for why he would act the way he was.

He took J.D. home, and then about 8:30 J.D. threw up in bed, so they made him get in the shower. They gave him some aspirin and sent him to bed thinking he would be fine. The next morning, about 10 in the morning, J.D. got up and complained about his head hurting, but seemed to be acting fine. Then about 11, his friends came over to check on him, and that’s what J.D. was told that his friend was found dead in his own bed that morning. He ran into the room to question J.D. again, until his friends finally told him it was racing fuel and Mountain Dew. It was at that moment that J.D. suffered a seizure, and he called an ambulance.

Racing fuel is practically pure methanol, which is the cousin to ethanol, the type of alcohol that you drink. A methanol level of about 25% is toxic and can make you feel drunk. If your methanol level is at about 40%, that’s lethal, and that’s when you experience blindness, seizures, and coma. J.D.’s level was well over 100 even 24 hours after drinking the deadly cocktail.

J.D.’s father asked his friends to come see J.D. in the hospital to show them the result of their actions. He said the boys seemed to experience a clear change before and after seeing J.D. J.D.’s dad said he has a hole in his heart that will never be filled. The good news is that doctors were able to remove the methanol from his system, so he could donate his organs and save three other families.

You can never assume your child won’t be tempted to try a trend, even if they know how potentially dangerous it could be. If you’re ever concerned about your child, despite what they say to you, take them to the hospital, because you’d rather save their life and play it safe, rather than be sorry.