Did you know that marijuana can be made into a variety of edible forms? Dr Oz said this is a potential downside to legalizing pot, because it could put kids at risk. In 23 states, medical marijuana is legal (three more could be on the way).

Washington and Colorado became the first states to legalize the drug for recreational use. Colorado has become a hot spot for pot tourists. One retailer said that a majority of her business was from tourists.

Doctor Oz is afraid that the marketing of food-based delivery methods, such as candy or cookies, could target children. That’s a problem because of the highly concentrated amount of THC found in edible products.

This concentration could affect new users or children, if it falls into the wrong hands. Audience members at Dr Oz’s show had trouble telling photos of pot-laced candy apart from regular candy. 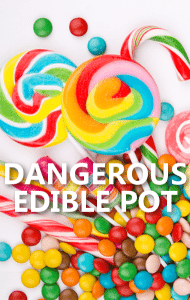 Dr Oz said he is concerned that medical and recreational marijuana is available in candy and cookies that could appeal to children and make them sick. (Vorobyeva / Shutterstock.com)

Dr Oz said that the industry has responded by making childproof containers, such as prescription bottles and bags. So he put these packages to the test, removing the drugs and replacing them with snacks to see whether kids could get into these containers.

A group of four-year-olds and five-year-olds took the test, getting into a bag within 10 seconds. They had trouble opening the medicine containers. Meanwhile, a group of seven- to nine-year-olds had an easier time with the bottles than the bags.

Dr Andrew Monte, an ER physician from the University of Colorado School of Medicine, said he is concerned about the high amount of THC in these products. He said that even adults might have problems with portion control, and if in some cases 1/10 of a cookie is an intoxicating dose, that could mean problems. Children who get these products accidentally could wind up in the ICU.

Doctor Oz said he questioned mixing pot with sugar, since we know sugar can be addictive. Dr Monte said that cases are on the rise among children, with seven ICU admissions for kids in Colorado since legalization in January 2014.

An animation helped Dr Oz explained how edible pot might affect children, perhaps causing saliva to travel into the lungs. Another concern, according to Dr Monte, is the risk for impaired cognitive development when young children are exposed to marijuana.

Dr Oz invited Michael Elliott, executive director of Colorado’s marijuana industry group, to speak for those who are selling edibles. Dr Oz wanted to know what the motivation was to put pot in a form that could be considered appealing to children.

Elliott said there are already 500 pages of state Marijuana law in Colorado. He also noted that initial studies have found that legalization has resulted in lower use among teens and reduced traffic fatalities, which he believed is a result of regulation.

As for the concern about edibles, high potency edibles are on the way out. Instead, they will be replaced with single-serving versions. In addition, there are potency limitations and mandatory testing requirements for those making edibles.

But what is the reason to make Cannabis in a form that could be appealing to kids? Elliott said that Colorado is leading the way, and people who are learning about marijuana for the first time need to be responsible.

Treat it like a drug, he suggested, and keep it out of reach of children. Just like you wouldn’t leave prescription pills out, don’t leave edible marijuana around where children can get access to it.

Dr Oz didn’t feel like Elliott was giving him a direct answer. His response is that the industry is responding to concerns and wants to be accountable and transparent. He pointed the finger at other states where sales and use are not regulated.

Dr Oz’s final thought was that products should be made less appealing to kids, just like candy cigarettes are no longer sold to children.