Dr Oz admitted that one of the biggest fights in his own home, is over how much time his kids spend on their devices. Now, many medical experts are wondering what affect video games and smart phones actually have on the brains of children. In Seattle, Washington, a mother came to a big realization when her daughter came to her wanting a new phone. In her new documentary Screenagers, Dr Delaney Ruston looks at how much access our kids should have to technology and how too much screen exposure could affect their development.

Dr Ruston sat down with Dr Oz, explaining that she approached her research more as a frustrated mom, as opposed to a doctor. Her son wanted more video games and her daughter wanted more social media, but as a physician she was also seeing kids distracted by technology. She was curious as to what the solutions were for finding balance. What surprised Dr Ruston the most was the science, as she explained that technology is both a psychological and physiological draw. She went as far as to say that the overuse of technology is “the biggest parenting issue of our time.” 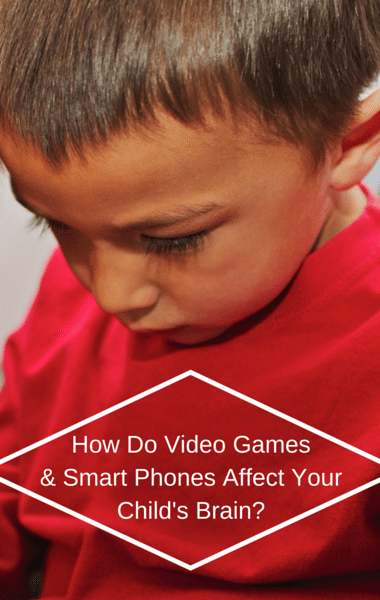 Dr Oz spoke with a doctor and mother who researched the affect smart phones and video games have on the development of children’s brains. (donhomer / Flickr)

Dr Oz then explained that his concern centered around the affect on children’s brains, because they are prone to addiction. He showed a brain scan of a five-year-old, pointing out that the most mature part of the brain is used for eyesight, while the front of the brain is incredibly immature. Our brains are developed from the back to the front, and executive functions are developed last. By the time a person is in their early twenties, their brain still isn’t fully developed, specifically in the area of self control. Basically, that means you’re not fully capable of dealing with addictive behaviors until you’re in your early twenties.

Dr Oz: The Affect Of Technology On Children’s Brains

Dr Ruston’s documentary featured a study that showed how the brain cells of mice were permanently changed because of flashing lights and sounds. Dr Ruston argued that it could be the same as what happens to children when they’re using cell phones and video games. She further explained that we can’t look at kids’ brains in the same microscopic way that we can mice brains, but the studies are certainly showing concerning results. Other studies have also found correlations between screen time and attention span.

What truly surprised Dr Oz was how Dr Ruston got kids to reveal the truth about technology like they never had before. One little girl shared that her mom will talk to her, then go back to her phone and repeats that cycle, saying that her mom could certainly spend less time on her phone. Several young girls also admitted that social media is a competition.

Dr Oz then spoke to Simon Sinek, author of “Start with Why.” Simon explained that when we are young, we only need approval from our parents. As we grow up, we only need approval from our peers which causes a lot of anxiety. During that time, we are supposed to learn to rely on our peers, which is why Simon is afraid that kids may not experience that anxiety, teaching them the coping skills they need throughout life. It’s important for children to learn how to form deep, meaningful relationships.

Simon argued that technology could be the biggest addiction of all. He explained that dopamine, a chemical in the brain responsible for pleasure, is released when we engage in social media. Dopamine is the same chemical behind alcohol, nicotine, and gambling. There are age restrictions on those products because it’s known that a child’s brain cannot deal with the stimulation, but yet there are no restrictions on our devices.

Dr Ruston gave her daughter a smart phone, but developed a compromise. She first wrote out a contract, but then spoke with her daughter about how to find balance with all the technology in her life. Dr Oz agreed that it wasn’t rational to ban technology, but perhaps you can make the bedroom a cell phone-free room and set a screen time curfew while banning technology from the meal time.