Super model Ashley Graham was thrilled to share some of her person diet and beauty secrets during her visit with Dr Oz. For the first time, Ashley shared a picture of the Barbie that was created in her likeness. She explained that she agreed to make a Barbie, but her thighs had to touch and she had to have cellulite. Unfortunately they couldn’t give her cellulite because it would “look like a mistake” but her thighs touch, she’s got a little belly fat, and she certainly looks like Ashley.

Ashley Graham also shared some beauty secrets with Dr. Oz, including her Beet Smoothie Recipe that boosts your energy and Ashley’s secret to radiant skin all day long – rosewater!  You are going to love the recipes on the next page… 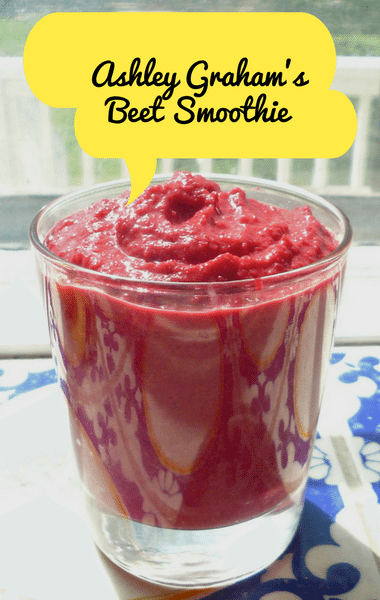 Super model Ashley Graham was more than happy to share the recipe for her super energizing beet smoothie that makes for a perfect breakfast or snack. (ideowl / Flickr)

Dr Oz then surprised a super fan named Sara by asking her to come down and join Ashley and him on set. Sara told Ashley that before she started modeling, she saw a picture of Ashley on the runway wearing a black bikini with studs on it as well as tall boots. It was that picture that inspired her to believe she could do the same thing.

That picture is saved in her phone, as well as a side-by-side of Sara wearing a bikini Ashley also wore and the following quote:

The woman on the left is trailblazer, an inspiration, and a role model. On the right is just me, who aspires to be like Ashley Graham.

Sara was lucky enough to then stand by Ashley’s side as Ashley shared the recipe for one of her go-to drinks, an energizing Beet Smoothie, on the next page…

But she didn’t stop here, she shared even more beauty secrets with Dr. Oz, on the next page…

Dr Oz wanted to point out that Ashley Graham has food FOMO just like him. Because she has food FOMO or “fear of missing out” no matter where she goes Ashley feels like she has to order everything on the menu. Fortunately a lot of her friends have it too so they “go in” when they go out to dinner. Dr Oz believes that at the end of his life, he will regret the things he didn’t do as opposed to the things he did.

Next, Ashley shared her go-to tool for glowing skin.

Ashley’s secret for glowing skin all day long is actually rose water. She claims it’s her beauty secret and she keeps it in her purse at all times to keep her skin nice and hydrated.

Do you have a beauty secret that makes you feel beautiful and confident all day long?