Dr Oz spent the entire hour of his March 16 show talking about the murder case involving Gary Smith and Michael McQueen, and whether new medical technology could prove Gary’s alleged innocence. In September 2012, Gary Smith was out on bond waiting to go back to court in hopes of winning freedom. Gary was determined to prove he was innocent, which is why his legal team was willing to turn to a new kind of evidence: an fMRI Lie Detector. An fMRI maps brain activity and proponents say it can be used to determine if someone is telling the truth because your brain activity looks different when you lie, compared to when you tell the truth. Purposefully lying requires a lot more of the brain to be active, than when you’re telling the truth.

Dr Robert Huizenga, the man behind the fMRI, joined Dr Oz and explained that he was pretty frightened while Gary was undergoing the test. He admitted he was nervous about the possibility of having to tell a trained killer, a veteran like Gary, that he was a cold-blooded killer, if the test said so. Dr Huizenga and his brother run a business in which they are trying to market fMRI’s for the legal system. Dr Huizenga argued that the fMRI is the first scientifically-backed way to tell the truth from a lie. Plus, traditional lie detectors only work 60% of the time according to the CIA, which is why Dr Huizenga believes his machine is the solution. 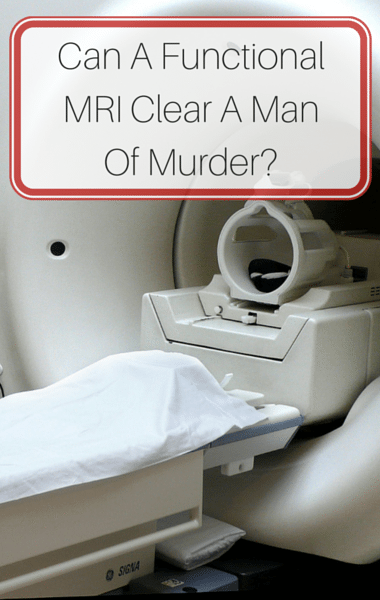 Dr Oz learned more about the functional MRI and the doctor who believes it could be used to determine whether someone is telling the truth, even in a murder case. (calliope / Flickr)

A functional MRI goes inside the brain, while the patient lies perfectly still, only answering yes or no questions by pressing buttons on a small remote in their hand. They look closely at what goes on in the brain when the patient lies and when they tell the truth, first asking very simple questions, before getting to harder ones.

Dr Huizenga then used his own footage to show what happened when Gary took the test. Dr Huizenga shared those results with Gary and his sister, showing that Gary had been telling the truth. Unfortunately, the judge for the second trial excluded the results of the test, explained David Moyse, Gary’s defense attorney. He went ahead and got the test to shine a light on Gary’s innocence and also to show what the test itself can truly do. As for the trial, the jury convicted Gary of involuntary manslaughter and use of a handgun. The sentence was lowered, but he was still sentenced to 28 years in jail.

Dr Huizenga was so passionate about the test that he tracked down the jurors who convicted Gary the second time, to see if the test results would have changed their decision. They admitted they were ashamed of the justice system, and some even said they knew he was innocent.

Dr Oz: Debating The Use Of FMRI Lie Detection

Dr Oz asked his colleague at Columbia, Dr Randy Marshall to join the show and weigh in on the science and functional MRI’s as lie detectors. Dr Marshall argued that he doesn’t think we’re ready to use the fMRI in the legal system. He explained that it’s great for identifying patterns of activity in the brain but the research that led to the development of the lie detector technique, was college students in a lab environment being told to lie or tell the truth. He said it’s a whole different situation to apply that technique in the real world. The emotions and the high stakes of the answers can change things.

There’s also the idea that some people could find ways to trick the machine. Dr Marshall explained that it’s been shown that moving your toes or even thinking about moving your toes, may produce a pattern of activity that overlaps, disrupts, or obscures a difference in regions of the brain that detect a lie or the truth.

Dr Oz further explained that the theory behind fMRI lie detection, is that areas of the brain will light up because of the effort it requires to make up lies. But if you curled your toes, the test could come back with results very similar to the truth.

Dr Oz: Is The Functional MRI A Reliable Lie Detector?

In order for the fMRI to become a lie detection tool, it would come down to the amount of error that could be allowed. There’s a concept called false memory, in which we create what we think happened and we solidify it over time. Over time, that becomes our truth, which is why a possible lie could appear as the truth in a test like the fMRI. Plus, what do you do if someone is a skilled liar? It can often be very hard to tell the difference between a lie and the truth, even with a brain scan.

Dr Huizenga argued that counter-measures like moving your toes, isn’t an issue because those conducting the test look for those things and can spot them. He also explained that there’s no difference between unemotional and emotional truth. He also pointed out that he’s tried the test on people with schizophrenia and found that it still worked, so he disagreed with Dr Marshall’s opinion.

Dr Oz reached out to Liz Phelps, a neuroscientist who testified against Gary’s test results being admissible for the case. She stated “The science behind FMRI for lie detection in the real world has failed to address critical issues that undermind its reliability.”

Dr Oz also explained that in the legal system, there’s something called the Frye Standard, which means that to allow any kind of forensic test, the test has to be generally accepted within the scientific field. Dr Huizenga argued that there is nothing generally accepted in anything. Dr Marshall acknowledged that we’re constantly learning more about the brain, which is why we need to apply the technique and test it in the courts to see if you can really corroborate with other evidence. He doesn’t believe it will ever reach the level of a DNA sample.

September 2012, Gary Smith was convicted of manslaughter and sentenced to 28 years in prison. In August 2014, after another appeal, he was granted the opportunity for a new trial. Gary’s legal team negotiated a plea for involuntary manslaughter. As part of the deal, he doesn’t have to admit guilt and received no additional jail time. After six years, Gary was set free.