While discussing surrogacy horror stories, Dr Oz introduced a couple who desperately wanted to have another baby, only to have their journey turn into a nightmare. Gwen and Tom used a surrogate the first time and because it went so well, decided to use one again. They found their surrogate online, where she advertised her services. They felt they made a good connection with her but because Gwen had undergone a hysterectomy, they chose to use the woman’s egg.

They did everything the same as they did for their son. They didn’t use a lawyer, but used a background check and everything came back clear. She actually gave them a contract to sign, and the couple didn’t check to be sure she had signed it. They just took her word for it. Six weeks after the surrogate became pregnant, they got into a disagreement. She was smoking and they wanted her to stop. She terminated the agreement and cut off all communication. All they knew was that she gave birth to a baby girl, and her attorney actually contacted them. Because Tom is the biological father, the surrogate sued him for child support, health insurance, life insurance, and all her attorney fears. 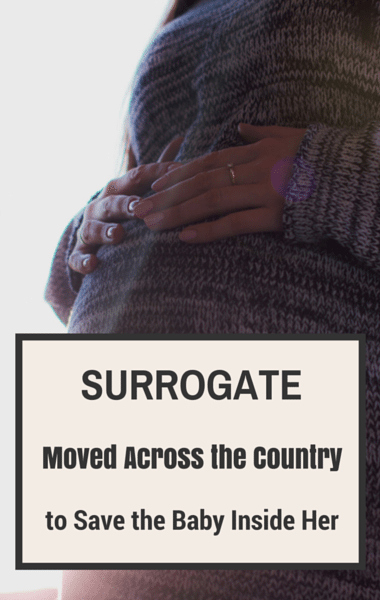 Dr Oz spoke with a surrogate who traveled 900 miles to protect the baby the intended parents no longer wanted because of birth defects. (freestocks / Flickr)

Gwen and Tom joined Dr Oz and shared that in the end, the judge told the surrogate she could keep the baby but Tom would be declared a sperm donor with no parental rights. They never even go to see the baby girl. It basically felt like the baby was kidnapped and they were forced to pay ransom. Gwen and Tom went on to self publish a book, “Surrogacy or Conspiracy.”

Gwen and Tom were brought to tears saying they love that little girl and think about her all the time. They wanted her to know that they loved her and wanted her, despite her biological mom telling her that her father never wanted.

Next, Dr Oz shared the story of a woman named Crystal, who became a surrogate for a couple who couldn’t conceive on their own. Crystal has two girls of her own and loves the idea of being a surrogate. She met a couple through an agency and made an immediate connection, so they signed a contract. Ten days after an in vitro procedure, she became pregnant with a girl. At 20 weeks, a routine ultrasound showed a cleft lip and palate and other possible birth defects. Further testing needed to be done to determine how severe the defects were.

She was five months pregnant, yet the couple wanted to terminate. They offered her $10,000 to have an abortion. Crystal could feel the life inside her, and she knew she had to fight for her so she told the couple no and never saw them again. Crystal explained to Dr Oz that because the parents had opted out, she felt her only option was to take responsibility for the pregnancy herself.

She looked into the possibility of not staying in Connecticut because in that state, a surrogate mother not related to the child, cannot obtain legal parental rights. They also wanted to find a medical facility that could support all of the baby’s needs, and they found both those criteria in Michigan. She packed up her two girls and moved 900 miles to Michigan. The baby girl was with her for eleven days until she met an amazing adoptive family through a friend on Facebook.

Would you consider surrogacy if you were faced with infertility issues?