One of the most common questions about death is who do you see right before you die? Dr Oz and his team interviewed dozens of people in hopes of coming up with some sort of answer. What he learned will likely shock you and comfort you, while undoubtedly changing the way you think about and understand life and death.

Not too surprisingly, as a surgeon, Dr Oz has heard quite a number of stories from patients who were close to death and then miraculously brought back to life. It’s those stories that inspired Dr Oz to launch an investigation into what and who people see before they die.

Who Do You See When Your Life Comes To An End?

Dr Oz welcomed two patients who experienced their own brush with death and lived to share what or who they saw, before essentially coming back to life. For one woman who was in a coma with her organs shutting down one by one, she recalled feeling herself dying but also feeling herself “expanding” and going further away what was happening in the physical world. 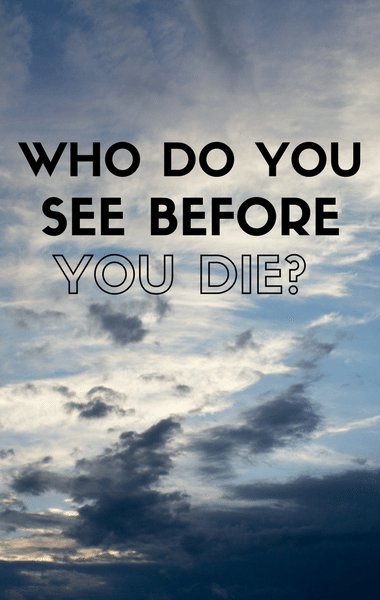 Who or what do you see before you die? After speaking with people who had near-death experiences, Dr Oz believes he has an idea. (cdharrison / Flickr)

Another man underwent a craniotomy and that surgery led to an infection, then sepsis then septic shock. He knew he was dying and felt like he couldn’t fight any longer. He described the pain, anxiety, and fear seemingly disappearing from his body and mind.

Dr Oz was joined by that man and woman, Anita Moorjani and Dale Reppert, who know all too well what can happen right before you die, as well as grief counselor David Kessler . Dr Oz explained that from all the stories he’s heard, he believes there are three things people see before death, the first of which is loved ones.

“This Is Not Your Time Yet, You Must Return”

Anita was told by doctors she had just hours to live. She explained that she was in a coma because she had end stage lymphoma. She claimed that despite being in a coma, she actually felt amazing and the first person she saw was her dad who had passed away ten years prior to that experience. When she was growing up, she and her father had a complicated relationship, but at that point she felt nothing but love from him. She shared that her dad told her it wasn’t her time to die yet and her purpose wasn’t completed yet.

Do You See Loved Ones When You Die?

Dale claimed his journey began when he lost the battle with meningitis and sepsis. He realized that he had to give up everything here, including his wife and children. He remembered seeing his mother, grandmother, uncle, grandfather, all peaceful. He felt like he was wrapped in a warm, loving, kind blanket.

Dr Oz was curious as to why we tend to see loved ones as we face death, and David explained that one theory is that as our body winds down, the brain malfunctions and creates impulses or hallucinations. But even David wonders if we can really know all there is to know about death. The truth is that a lot of people experience the same things when right before they pass.

Why Do You See A White Light As You Die?

Another common sight for people right before they pass is a bright, white light. Dale explained that as soon as he realized he was dying, he began seeing white auras off bodies in the ICU and then the white light spread until it enveloped him. As soon as he was enveloped by the light is when he felt the unexplainable, peaceful feeling.

David believes in the brain, we have electrical surges as oxygen drops. Those electrical surges could possibly explain the white light. But can science really know that for sure? Or could that light actually be a pathway to where we go after we die?