Dr Oz said that Heart Disease is the #1 killer of women, and the new face of heart attacks in America is women under age 55, who are more likely to die than anyone else. Heart Disease strikes more than half a million women in the US each year, and in patients under age 50, women are twice as likely to die from a Heart Attack as men.

Your risk factors may include Obesity, Hypertension, Family History, Smoking, Excessive Alcohol Use, Poor Diet, and Lack of Exercise. A new study found that women who suffer from Depression are twice as likely to have a Heart Attack or die of Heart Disease.

Gail was 37, Robin was 27, and Kendall was 32: these are the ages at which Dr Oz’s guests had Heart Attacks. Dr Oz said that younger women and even medical professionals don’t expect Heart Attacks to happen at this age. 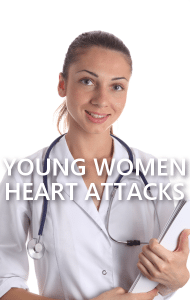 Young women are a fast-growing group of Heart Attack sufferers, and they may be the most likely to die as a result. Know the symptoms and what to do.

Gail said she had no idea she was at risk, other than that she was under some stress. She was not Diabetic, was in good shape, and did not have Hypertension. Her husband was deployed to Iraq, her daughter started high school, and she was working a lot, so she was stressed.

Robin had a hidden risk factor on her father’s side of the family. She is a gymnastics coach and initially thought she dislocated her shoulder. But doctors knew something else was wrong, and she had Cardiac Arrest while they were performing an EKG. She was told she would not have survived if she wasn’t already at the hospital.

Kendall also has a first-degree relative (a parent or grandparent) under age 60 who has Heart Disease, that means you have a genetic risk for Premature Heart Disease. She said that she also made a series of poor lifestyle choices she knew were not good for her.

Dr Oz said that women under age 55 are less likely to seek medical attention when they may be having a Heart Attack. “If you’re listening to your body…, if you know those warning signs, you can save your own life,” Dr Oz said.

What are the five symptoms American women need to know?

It may not be in your chest. It could be your shoulder or jaw. Kendall felt it in her fingertips.

Are you tired all the time? Gail was used to being exhausted, but things got so bad that she was worn out just making a trip to the ladies’ room. She also recalled breaking a sweat while eating dinner.

Robin said she thought her feeling of nausea was related to her shoulder pain. But when she went to the bathroom and couldn’t stop sweating, she knew something was wrong.

Dr Oz said that a pathologist once told him that she always looks at the stomach first in a young woman. Women may mistake symptoms for indigestion, which can be a fatal misunderstanding.

Though your heart does not have nerves, you may feel referred pain traveling from the spine to the stomach. That may make you think twice before popping another antacid.

Kendall thought she might have a panic attack or anxiety attack because she could not catch her breath.

Gail said that she does remember this feeling.

If the pain lasts after you try this, think of your heart. Dr Oz said you must remember these symptoms.

Dr Oz: What To Do If You’re Having a Heart Attack

What should you do if you think you are having a heart attack? Call 911 and chew a 325 mg Aspirin while you are waiting for the ambulance.

Kendall, a mother and wife, said she knows women sometimes put their own needs last. “If you have any of these symptoms, please see your doctor,” she said. “Don’t take it for granted that your age is your advantage.”

She also said that changing your diet and getting more exercise can help you get on a better path for your health.