They’ve been called “mother’s little helper” or “chill pills” but millions of Americans take anti-anxiety medications, not knowing they could potentially be more dangerous than most would believe. Anti-anxiety drugs when mainstream in the 1960’s and were mainly marketed to women as a “cure-all” for everything from mood swings and stress, to everyday worries.

Benzodiazepines or benzos, became the go-to drug for anxiety and depression. The drugs were viewed as harmless, so taking, sharing, and even joking about them became normal. Women are now twice as likely to take benzos and according to a new study, the number of patients filling prescriptions for benzos rose 37% between 1996 and 2013. Even more shocking, the number of people who died from benzo overdoses rose 400% in the last 20 years. So what do you really need to know about the so-called chill pills? 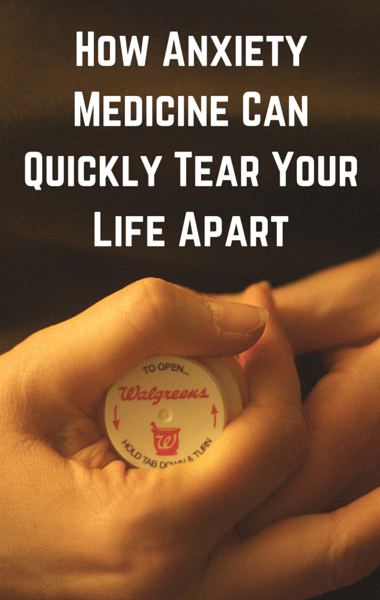 While discussing the rise in anti-anxiety medication use, Dr Oz spoke with a woman who found her life spiraling out of control thanks to benzos. ([email protected] / Flickr)

Dr Oz spoke to a nurse, Joani Gammill, who explained that the stigma in our culture is gone when it comes to benzos. Doctors prescribe them easily to help patients deal with stress. It doesn’t help that many women are taking them casually until a few weeks later it turns into a bad habit. Joani believes moms are under so much pressure and don’t have time to do normal things to help them relax, and it’s a lot quicker to pop a pill

Dr Oz then explained that if you experience anxiety, it could cause symptoms like sweating, shaking, pounding heart, or trouble sleeping. Within minutes of taking a benzodiazepine, neurotransmitters are suppressed, making you feel calm. Nerve impulses are also slowed, which relaxes the heart muscles, causing your heart to slow down. Within a couple hours, it wears off and the symptoms come back. Over time, it can become a cycle, spiralling into addiction. That’s exactly what happened to Lynn.

Dr Oz: Anti-Anxiety Drug Use Spirals Out Of Control

From the outside, it likely seemed as if Lynn had it all. She had a husband, a house, and three children. But on the inside she was “deteriorating.” Her three children were all in diapers at the same time and the stress to be a good mom, wife, and employee was overwhelming. She had a friend who had gotten anti-anxiety medication from another friend, and described them as giving her a sense of relief and peace. When she took the first pill, she felt such relief that she didn’t think she needed a therapist because she found what she needed.

Lynn got the prescription for benzodiazepines fairly easily and was taking them every day. Within a short period of time, she began feeling like she needed more pills. As soon as the pill would wear off, she felt like she needed another one. Lynn then shared with Dr Oz that her addiction got so bad that at the end of her use, she was a size zero, was on welfare, was divorced, and was unemployable. She described feeling hollow and dead on the inside, saying she didn’t know who she was anymore.

Lynn remembered trying and failing to stop. But one night she was putting her babies to bed and picked up the pills and alcohol, realizing at that moment that if she didn’t stop, she could end up dead. When asked if she ever considered taking her own life, she remembered waking up in the morning thinking “not another day.” The good news is that she beat the addiction, but admitted she has to work hard toward a program of self care to prevent herself from “picking up” again.

Joani then said moms often pass the pills from one mom to the other, which makes it so easy for women to start. She acknowledged Lynn’s strength for coming onto her first TV show without tranquilizers. Joani also explained that that many times people are using the benzos in combination with other drugs or alcohol, and that’s how people are dying. To get through without the pills, Lynn attends 12-step meetings, she works out, she meditates, and she sees a therapist on a regular basis.

Joani explained that benzodiazepines can be appropriate for situational anxiety like getting on an airplane or visiting the dentist. They can also help with epilepsy or alcohol withdrawal. Psychiatrist Dr Sue Varma joined the conversation to share some red flags when it comes to anxiety drugs. The first red flag is if the anti-anxiety medication was prescribed at the end of the doctor’s appointment. Often times, in that case, the prescription could be coming without a proper diagnosis. If the issue persists, see someone with mental health training, not just your general practitioner.

Another red flag is that you’re regularly taking it more than once per week. You shouldn’t rely on benzos as the sole way to cope with anxiety. Antidepressants can be extremely effective to treat anxiety, without the dangerous side effects. Medication isn’t the only way to handle anxiety. If you feel you can’t live without them, you likely have a problem.