Dr. Oz: The Secret to Happiness

Dr. Oz has been talking to Pastor Rob Bell, who has been helping three unhappy women and three happy women learn the secret to happiness. Pastor Rob Bell explained that people who are unhappy believe that tomorrow is simply going to be a repeat of today. It’s a trapped feeling that makes them feel like it’s always going to be like this. But happy people understand that life isn’t perfect and that life is going to throw them curve balls. They’re not caught off guard because they’ve already decided they’re going to get through it. 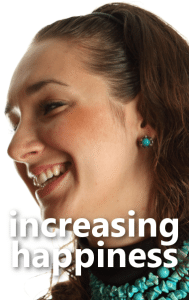 Dr. Oz sent Pastor Rob Bell to work with six women in order to find out the secret to happiness in his Dr. Oz Happiness Project, which was a success.

Pastor Bell had asked the three unhappy women to bring an object that symbolizes their unhappiness. They paired off with the happy women and explained why they chose it. They also had to work out together to figure out what step the unhappy person could take toward happiness. Unhappy Marianne paired off with happy Latanya. Latanya said she believed happiness is a choice you make. Marianne’s object was a laptop that represented her unfinished projects.

Susan’s mom was one of the happy people. She wasn’t always happy. Her mom passed away with ovarian cancer and before she died, she told Susan she had to let go of the anger because if she didn’t, it would eat her up inside. She tries to remember that every day. Meryl also lost her mom. She brought two books from each of her parents, because they represented the last time she was really loved. Susan said it was hard when both parents are gone. The two bonded over their shared losses.

Crystal, one of the happy people, lost a beloved nephew and it devastated her. But she realized that there are things she can’t control, which has made her feel free. She was paired with unhappy Concheta, who brought her diplomas. She thought having a diploma would get her a great job, but she hadn’t reached that point yet. Crystal said these degrees are stepping stones to the next phase of her life. She asked Conchetta to repeat that she was an expert and that she had the tools she needed to be successful.

Pastor Rob explained that it was his goal for these women to feel a shift and learn how to be happier in their lives.

Back in Dr. Oz’s studio, Pastor Rob explained to Dr. Oz that one of the strategies for increasing happiness is to put your hands palm up on your knees while sitting. Clench them into fists, storing all your stress into them. Then open your hands. This should feel good and help you release all that unhappiness.

Pastor Rob has a new special called The Rob Bell Show, premiering on OWN on December 21, 2014. Dr. Oz also reported that all the women who were unhappy before now say they’re feeling much better about their lives.