Dr Oz argued that waist training is the most controversial diet trend ever covered on his show. He began by showing a picture of Kim Kardashian that was undoubtedly seen by millions of people. On her Instagram, she posted a naked photo of herself, showing off a tiny waist and wide hips. Since she posted that photo, online searches for waist trainers skyrocketed.

Despite Dr Oz and several other professionals speaking out against waist training and pointing out the dangerous side effects, the trend only seems to be growing. Celebrities like the Kardashians and Jessica Alba seem to promote waist training on social media, as headlines of waist training horror stories make their way into the media. 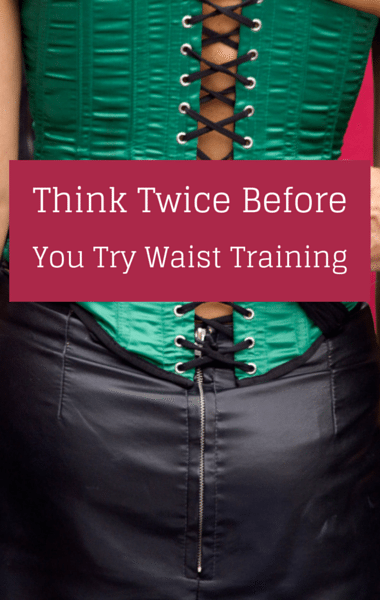 Dr Oz explored the dark side of waist training and spoke to a woman who had six ribs removed just to achieve a tinier waist. (quinnanya / Flickr)

Dr Oz heard from a woman who began waist training when she was 17-years-old. She’s now been doing it steadily for about five years. She wears a waist trainer for 12 hours a day and sleeps in it as well. She argued that the trend has helped her lose a couple inches in her waist. Her doctor has warned her not to wear it so often, pointing out problems with blood circulation, but that hasn’t stopped her.

Chiropractors, physical therapists, and other doctors all agree that wearing a compression garment for that long not only makes it harder to breathe, but also compresses the organs and the bones, potentially leading to more serious problems.

Dr Oz then turned to a group of women who all use waist training in hopes of achieving a tinier waist and flatter stomach. They argued that it helped their posture and helped them sweat more during workouts. One woman admitted that she felt so lightheaded before the show that she actually had to remove her’s. Dr Oz stated that he believes waist training doesn’t help you lose fat at all, but instead just redistributes the fat elsewhere, while moving organs in a dangerous way. “Beauty is pain,” one woman stated.

Dr Oz wanted to find out just how much a waist trainer can affect someone’s breathing capability. An experiment proved that a waist trainer is “literally robbing you of your breath.”

Dr Oz then introduced Cynthia, who was told by her doctor a year ago that she needed to stop wearing the waist trainer because it was affecting her uterus and her bone structure. Cynthia was told her hip bones were weak and her uterus had dropped. That was enough to convince at least one woman that maybe she needed to let go of her waist trainer.

Dr Oz then showed pictures of Pixee Fox, a woman who wears a waist trainer 24 hours a day. Pixee is a waist-trainer addict and has become a celebrity solely because of her remarkably tiny waist. Pixee has gone to extreme measures to achieve a 16-inch waist, but still believes her waist isn’t tiny enough. She walked out to join Dr Oz, making jaws drop. She removed her corset to show what her waist looks like without it.

She explained that she was currently wearing a 16-inch corset and would be going down to a 14-inch corset soon. She explained that she’s dedicating her life to her waist training, and called herself an “expert in corset training.” She also stated that it’s hard to do what she does. She revealed to Dr Oz that she had six ribs removed in order to fit into a smaller corset. She had to search in America for a doctor that would agree to the procedure, before laughing as she described herself as “not ordinary.”

She found a surgeon in Indiana who removes ribs daily, typically for those with bone cancer or other conditions that require life-saving procedures to remove a rib. Pixee then explained that she knew all the possible consequences but she sees herself as a science project and she wants to see how far she can go to reach her goal. Her surgeon believed she was “realistic” with her goals and that the surgery wouldn’t damage her.

Dr Oz showed an image of Pixee before all of her cosmetic surgeries, and she’s certainly unrecognizable but absolutely stunning. She argued that she would rather die happy than live her life miserable, and Dr Oz said he wanted her to be happy, but he wanted it to come from the right place.

Dr Oz: What Happens When You Wear A Waist Trainer

Dr Oz then showed Pixee real organs within the outline of a normal person, explaining that there’s just enough room for what’s inside the body. With Pixee’s 16-inch waist trainer, she has just roughly 5 inches of space inside her waist. To demonstrate, Dr Oz showed how organs were squeezed and moved to accommodate the smaller waist. Pixee stated that she knew what she was doing and that it wasn’t damaging her body, but said anyone should be careful with waist training and do it for the right reasons, without pushing your body. She believes that she projects a healthy lifestyle, and inspires others to achieve whatever they want to do.