Dr. Oz talked to hilarious comedian Wanda Sykes about going through menopause. Wanda Sykes said she has a lot of hot flashes now that she’s turned 50 and they’re pretty bad. She said if she ever killed someone, she would hope for a jury full of women going through hot flashes, because they would acquit her. 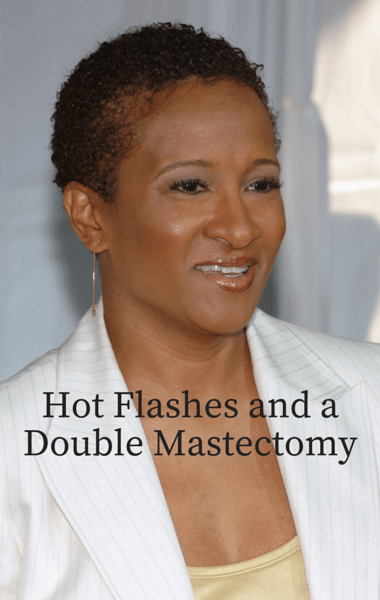 Dr. Oz talked to comedian Wanda Sykes about her hot flashes, her decision to get a double mastectomy, the worst part of motherhood, and how to stop snoring. (Featureflash / Shutterstock.com)

Dr. Oz explained certain things trigger hot flashes, like wine. Wanda loves wine and says it keeps her sane, so she said she’d just have to accept being a “hot, sweaty mess” then.

Wanda Sykes said being a mother is the most rewarding thing she’d ever done. But the worst part is that her kids make her put her life on hold. “They just suck the life out of you. It’s like all your hopes and dreams, just toss them in the trash can,” she joked.

Wanda Sykes said she used to know a lot because she’d watch and read the news. But now she doesn’t know anything about what’s going on.

She also wondered how presidents deal with being a parent and being president. She said if she was president and someone told her Putin had taken over Crimea from Ukraine, she would tell them she was taking Crimea so neither one of them could have it.

Wanda Sykes was diagnosed in 2011 with breast cancer. She made the decision to remove both of her breasts. She said she has a very strong history of breast cancer on her mother’s side, as well as prostate cancer.

Wanda said she found out she had cancer when she went in for a breast reduction. She said they found out about the early stage breast cancer and they suggested a double mastectomy to get rid of them for her best odds. She said she feels great now.

One of Dr. Oz’s viewers asked Wanda when she had her breasts removed, how did she decide how big to have her new breasts during reconstruction? Wanda said she originally wanted smaller breasts, but decided to go back to larger ones to “poke cancer in the eye.”

Wanda Sykes has a problem with snoring and she wondered what to do about it. Wanda said she actually doesn’t have a problem with it, but her wife does. And then her wife wakes her up.

Dr. Oz took Wanda to a bed on the set. He asked her to lay down to see how she sleeps. Wanda sleeps on her back, so Dr. Oz suggested she sleep on her side. This will help prevent the snoring.

Dr. Oz put a tennis ball in a stocking and Wanda Sykes said, “Is this some Fifty Shades of Dr. Oz?” Dr. Oz tied the stocking to Wanda’s back so that whenever she lied on her back at night, it would make her want to readjust to her side, because it’s uncomfortable to sleep on a tennis ball.