Dr. Oz could not have chosen a better way to begin a new season than with the best type of medicine for his audience. The stars of Whose Line is it, Anyway stopped by and they brought the laughs to cure whatever ails you. Wayne Brady, Colin Mochrie and Aisha Tyler performed their special form of improv on Dr. Oz’s stage, which left everyone in the audience in stitches, but not the kind that require a doctor. 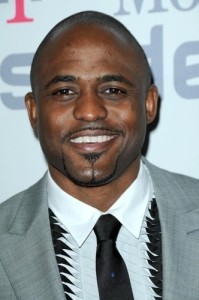 Wayne Brady told Dr Oz anxiety from bullying when he was a child caused him to stutter, but improv acting has helped him to overcome it as an adult! (s_bukley / Shutterstock.com)

It might not be obvious now, but as a child Wayne Brady struggled with stuttering due to a great deal of anxiety he felt from being bullied by other children. Wayne says it was so difficult at times that he just decided to shut up and not say anything since finding the words was often so challenging. He told Dr. Oz he believes improv acting helped him to overcome the stuttering because it encourages him to say the first thing that pops into his head.

Dr. Oz says that many adults, including famous celebrities, face health issues that might surprise you, but they might also help you to feel less alone if you struggle with something similar. He invited Wayne Brady to play a game with him to see if he could match a health condition to a famous talk show host, including one for Dr. Oz. Play along and see how you would do!

Oprah Winfrey: Oprah’s health condition is Hypothyroidism, which she was relieved to learn after battling for so many years with weight gain and trouble losing it.

David Letterman: David suffers from Shingles and Dr. Oz says it was so bad at one point that Bruce Willis had to sit in for him as the host of his show while he was recovering.

Dr. Oz: Dr. Oz has spoken pretty openly about the fact he has Excessive Gas, so that one was easy for Wayne Brady to get correct.

Rachael Ray: Rachael actually had a Vocal Cord Cyst, which is the reason her voice often sounds so rough and raspy.

Elisabeth Hasselbeck: Elisabeth has Celiac Disease, which became apparent to her after she was a contestant on the reality show Survivor. While the other castaways were starving from not having certain foods, she was thriving.

Barbara Walters: Barbara underwent Heart Valve Surgery (at Dr. Oz’s hospital) and went back to The View after a successful recovery.

Dr. Oz says he loves it when Wayne Brady sings improv in his show, so he asked him to do the same for his audience. He asked them to submit song title ideas based on health issues for Wayne to pull out of a doctor’s bag and here are some that he chose and performed.

“I Didn’t Need That Kidney Anyway” sung with a disco beat.

“All I Want for Christmas is Health Insurance” sung as a Christmas tune, of course.

Have you ever heard Wayne Brady improvise a song? If not, you are missing out on his truly amazing talent mixed with hilarious lyrics. What a treat he gave to Dr. Oz’s audience!