A career criminal is spending 25 years to life in prison for robbing, he claims, up to 100 people. There are over 300,000 muggings a year while people are riding bikes, on the train, or even just getting out of the car in their own driveway. So how can you protect yourself? NBC national news investigative correspondent Jeff Rossen went inside a maximum security prison to find out how you can avoid becoming a victim.

Jeff sat down with David, a career criminal, who was willing to sit dow with Jeff to tell all, starting with how muggers strike. David explained that if he were looking to rob someone on the street, he would walk up to them and ask them for the time. The moment someone looks at their watch, they’re vulnerable. He could grab them by the wrist, slide it behind their bike and tell them “you know what this is, I’m not going to hurt you” while using his other hand to grab their wallet.

If someone comes up to you and asks you for the time, you’re better off giving it to them from a distance or continuing walking. Don’t break your stride or stop walking.

Dr Oz: Who’s At Risk For Being Mugged? 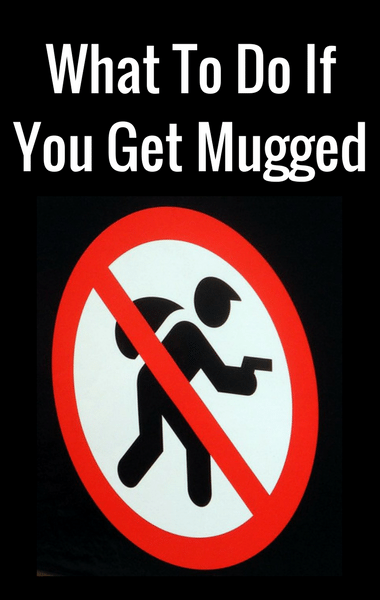 A career criminal serving time in jail shared his secrets with Dr Oz to help viewers better prepare themselves in case they ever face a mugger. (arenamontanus / Flickr)

Who is an ideal target? According to David, it’s whoever is alone. Age never really mattered, but elderly people were seen as weaker. David explained that while you’re under the influence or in the middle of “that life” you have no remorse and you have no feelings, so they don’t even feel bad about targeting the elderly.

WNBC, a New York station, sent out surveys to other convicted muggers and over 70% of them said they either always or sometimes carry a weapon.

Dr Oz: What To Do If Someone Tries To Rob You

David explained that a lot of male robbers may target women because they’re perceived as weaker, but he would typically target men because women scream. That’s a great tip for anyone looking to ward of a potential mugger: make noise! For David, one woman had a whistle which he said was a great idea, as well as air horns and anything else that makes noise.

But the single most effective weapon is mace. However, it’s only effective if it’s already in your hand, not in your purse or your pocket. The one thing you should never do is physically fight a mugger. David explained “Unless you’re a good fighter, that’s not a good idea because you just escalated the situation.”

Muggers aren’t necessarily trying to hurt someone, but they will.

Dr Oz: Where Are You Most Vulnerable For Robberies?

When asked where victims may be most vulnerable, David’s answer was quite surprising. If you live in the suburbs, you’re most vulnerable in your driveway because you have the garage in front of you and two houses on the side so there’s less to worry about in terms of people seeing the attack. He always told his family and friends to look all around them before opening the car door.

In the city, you’re most vulnerable on the subway platform. To avoid becoming a victim, stand around other people. Crowds deter robbers.

Dr Oz: What Are Robbers Looking For? What Should You Do?

Jeff then joined Dr Oz and shared that he learned robbers are looking for two things: cash and jewelry because they can get that quickly. Approximately 21% of those surveyed said they want to get your phone as well. Some will actually make you unlock the phone for them so they suddenly have access to a load of personal information.

David also told Jeff that Friday is the day you’re most at risk for a mugging because Friday is payday. Jeff admitted if he was attacked by a robber he would do two things: either scream like a girl or cooperate and let them have what they want because it’s not worth his life.