Dr Oz: What Is An Antioxidant?

Dr William Li said that Antioxidants are laced naturally into food and they help to protect our DNA and healthy cells from the damage caused by Free Radicals. 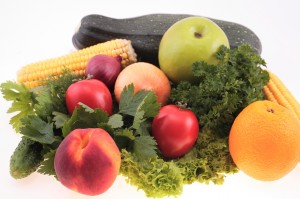 So that brings us to the next question – what are Free Radicals?  They are all of the nasty things in our environment like smoke, pollution and fried foods, all of which can cause Cancer.

Dr Oz has everyone in his audience take a Skin Carotenoid Test, which takes about 90 seconds and is a good way to gauge the level of antioxidants in your body. The Carotenoid scores ranged from about 10,000 to 50,000+.  The lowest range was red, followed by orange, and the the top two ranges were green and blue.  Doctor Oz said that you want to be in the blue or green ranges, but unfortunately most of the people in his audience were int he red and orange ranges, which is where most of America is.  Almost 40% of people in his audience was in the lowest category possible.  37.1% of people from his audience were in the second lowest category, which is still dangerously low.  Only 6% of Dr Oz’s audience was in the blue and green ranges.  This means that most people are getting only 2-3 servings of fruits and vegetables per day at best, rather than 5-9 servings.

Dr William Li said that you can get Antioxidants in a pill form, but it is best to get them naturally in the foods that you eat.  He said that studies have also shown that Organic foods have more antioxidants because they produce more in order to protect themselves naturally since there are no pesticides to help them out.  Doctor Oz took the Carotenoid Skin Test and found his levels were 75,000 which was extremely impressive!  He said that it is all because of the food choices that he makes.

Dr Oz picked a lady from his audience who was thin, looked fit and athletic, and everyone would assume she was healthy.  But her Carotenoid levels were among the lowest out of everyone in the audience.  Doctor Oz did a demonstration to explain why Antioxidants are so important.  You can think of your DNA as being balloons lined up along cables.  Your DNA copies itself regularly, but when it makes a mistake, that mistake keeps getting propagated and eventually turns into a rogue sociopathic cell that we call Cancer.  Now imagine that a Free Radical is like a tennis racket, so when  your DNA is not protected, then Free Radicals can easily get in and break them up causing the DNA to get unstable and collapse.  However, if you have Antioxidants in your body, they act like a shield and block the Free Radicals from hitting the DNA.  Here is a list of the three Cancer Fighting Antioxidant All-Stars that Doctor Oz said that we must incorporate into our diets!

Dr Oz’s first Cancer Fighting Antioxidant is Carotenoids.  Dr Li said that Carotenoids give fruits and vegetables their red, yellow and orange colors.  There are over 600 different types of Carotenoids and they are found in foods like persimmon, yellow squash and carrots.  We often hear about Lycopene or Beta Carotene, which are both types of Carotenoids.  Dr William Li said that studies have shown that you only need to eat a cup and a half of yellow squash to protect yourself against Lung Cancer.  Two persimmons protect you from Kidney Cancer, and carrots help to fight off Stomach Cancer.

Dr Oz’s final Cancer Fighting Antioxidant is Flavonoids, which protect your body indirectly.  There are 6,000 different types of Flavonoids, and when they go into our body, we metabolize them to make Uric Acid which neutralizes the Free Radicals.  Flavonoids are often found in brightly colored foods like raspberries, red cabbage and kumquats.  Flavonoids help to prevent Lung Cancer, and Dr William Li told Doctor Oz that you just need to eat 1/2 cup of red cabbage, 1/2 cup of raspberries or 2-3 kumquats per day to get this cancer fighting benefit.