Dr Oz: Eat This Not That

Dr Oz brought David Zinczenko, author of Eat This Not That, back onto his show to talk about Fast Food.  Are the calorie and fat levels reported on the menu really what you are getting when you order food at places like Taco Bell, McDonald’s and Wendy’s?  Doctor Oz took french fries from Wendy’s, a Filet-o-Fish sandwich from McDonalds, and a Beef Burrito Supreme from Taco Bell and sent them to an independent lab to see how much fat and how many calories were really found in these items.  David Zinczenko said that the menu numbers are estimates, because there is no way that a corporate office can know exactly what any of their branches are making, and nobody is over-serving veggies, it is all extra portions of sugar or fat.

Dr Oz had the Natural Cut French Fries with Sea Salt tested from Wendy’s, and the menu board said they have 220 calories and 11 grams of fat.  The lab 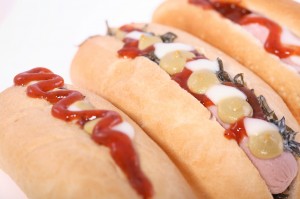 results found 237 calories and 11 grams of fat, so that is not too fat off.  But Doctor Oz pointed out that is still a lot of fat for this small amount of french fries.  David Zinczenko said that Wendy’s french fries sales have been up 10% since they changed the name to be Natural Cut with Sea Salt, but they should really be called supernatural because it is pure science fiction.  They might sound healthy, but really they are not.  Instead, David Zinczenko suggests ordering chili instead of the fries.  If you must get fries, try to get Steak Fries or fries with a larger surface area, because they absorb less oil and so have fewer calories.

Doctor Oz said that the menu says there are 380 calories and 18 grams of fat in a McDonalds Filet-O-Fish Sandwich, but Dr Oz’s independent lab found 407 calories and 22 grams of fat.  David Zinczenko said that people think they are eating healthy because it is fish, but between the oily breading, the buttered bun and the tartar sauce, this is really a burger of the sea!  Instead, ask for no cheese or tarter sauce.  Or better yet, just order a cheeseburger which has less calories, or a double burger which has only 10 more calories but lots more protein.

Dr Oz said that Taco Bell’s Menu claims that their Beef Burrito Supreme has 420 calories and 15 grams of fat, but Doctor Oz’s independent lab found 427 calories and 16 grams of fat… so that is not too bad of an estimate.  David Zinczenko said that the Fast Food Quick Fix here is to go with Taco Bell’s bean products instead, because the beef is only 80% real beef and 20% fillers.  Or if you want beef, get a Fresco Crunchy Taco.  Another healthy option at Taco Bell is the Pintos ‘N Cheese which has lots of fiber and protein for under 200 calories.