The sad truth is that hair restoration scams are more common than ever before. Dr Oz wanted to find out what was really going on inside popular clinics, to find out if some of them could be tricking people and trying to steal their money. Investigative reporter Elisabeth Leamy went undercover to find out, with the help of Ann. Ann’s hair is thinning in the front so she began thinking about hair restoration or hair transplant surgery. But she wasn’t sure if it was safe, so she teamed up with Elisabeth to find out more.

Elisabeth and Ann first conducted online searches to read online reviews about several hair restoration clinics. They then put on some hidden cameras and headed to a nearby, well-known hair restoration clinic. Almost immediately, they were already hit with a surprise. The person they met with told them he wasn’t a doctor, even though hair restoration is a medical procedure. So who would be doing the actual operation? 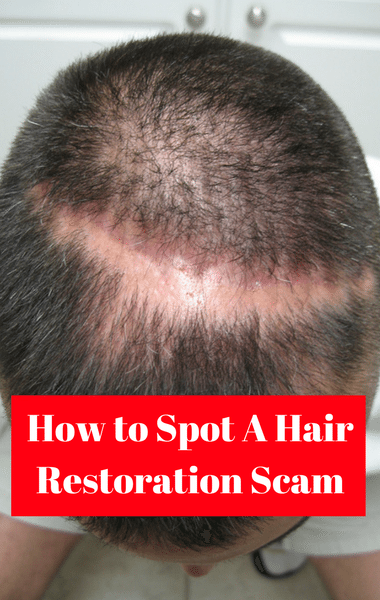 Elisabeth Leamy went undercover to show viewers how easy it is to be tricked by a hair restoration scam. Dr Oz shared the warning signs you should look for. (rmommaerts / Flickr)

In many online reviews, patients report that important parts of hair restoration procedures were done by non-medical staffers instead of doctors. When Elisabeth asked the man they met with if a doctor would be doing the actual work, they were told “we have technicians that work with the doctors, like heart surgery.”

Online reviewers, however, say that some technicians are far less skilled than others, which means a lack of consistency among results.

When asked about side effects or injuries, they were told Ann would have a scar on the back of her head. “But you’re never going to shave your head,” the man said to her. He also downplayed the risks and claimed there were no long-term side effects. Yet online reviewers described feeling incredible amounts of pain during and after the surgery as well as one reviewer saying “I left bloodied.”

Another reviewer wrote that they felt “an extreme sensation of tightness and pulling of my scalp.”

How Much Does Hair Restoration Surgery Cost?

The man guaranteed 100% results and said any grafts that don’t survive or grow abnormally would be replaced at no charge, “unless you don’t have sufficient donor hair, then it would be a refund.”

He even told Ann and Elisabeth that there was just 2-3 patients a year that come back and aren’t happy. However, several online reviews show unhappy patients who never received the results they were hoping for. When they finally met the doctor, he declared Ann a great candidate for the procedure. He estimated that it would cost her $10-12,000!

Ann admitted that if money were no object and Elisabeth wasn’t with her, she would have fallen for the scam. The salesman even showed his own before and after pictures from when he had the operation done himself. But the price Ann was later told was double what she was originally told because they informed her she would need two treatments.

Elisabeth admitted that she felt like she was in a business, not a doctor’s office. The salesman was called a “counselor” and the “educational brochures” were definitely marketing brochures. They even offered Ann a line of credit to pay for the procedure.

Are Hair Restorations Done By Doctors?

Dr Huebner also pointed out several more things. First, no one brought up the idea of testing. Not everyone is a candidate for a hair transplant because there are many medical diseases like thyroid conditions or hormone imbalances that can cause hair loss. There are also conditions that can cause you to lose your hair that don’t respond well to a hair transplant. Those are inflammatory conditions that would require getting a biopsy before getting a transplant.

Secondly, Dr Huebner wanted everyone to know that the technicians are just as important as the doctor they’re working with. They’re the ones cutting and placing the grafts and not all technicians are experienced. Because there’s no school for technicians, it’s something that’s taught on the job. Dr Huebner had even seen patients come in with one half of their head done well and the other half done horribly, because of two different technicians and experience levels.

Dr Oz: How To Avoid a Hair Restoration Scam

Dr Oz is hoping that organizations will soon get involved to stop these scams, since there’s no regulatory body. In the meantime, it’s up to each of us to do our homework and protect ourselves.