Dr. Oz had a new spin on his weight loss segment.  Usually Dr. Oz shows overweight individuals who have lost weight to help inspire us to eat healthy and exercise.  Lori is a different type of story though.  Lori was very overweight, and lost 250 pounds, but the way that she lost all of this weight could claim her life and destroy her family. 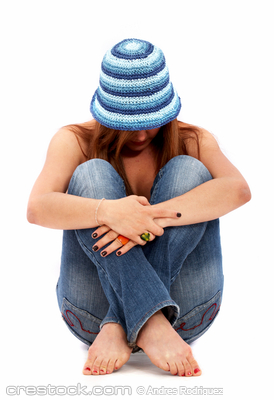 Lori is anorexic and cannot stand to eat, and when she does eat, she throws up (also making her bulimic).  Her cardiologist told her that if she keeps throwing up, her heart will just stop working.  No matter what she does though, she can’t keep herself from throwing up.  Lori told Dr. Oz that she feels just as trapped now as when she was heavy.

When Lori was shown an old photo of herself before she lost weight, Lori said she sees a sad women who wanted to wear nice clothes and go to amusement parks, but couldn’t.  Lori said she no longer associates herself with that woman.  However, Lori admitted to Dr. Oz that she is still a sad woman now.

Lori used to love cooking, but now she can’t stand the smell of food.  She is more angry and yells at her kids.  She feels horribly guilty about being mean to her kids because of her hunger.

Dr. Cynthia Bulik, the Director at the University of North Carolina Eating Disorder Center, said that the firs step is admit you have a problem (which Lori has done) and then to commit to fixing it (which Lori has now done too!).

So what has bulimia and anorexia done to Lori’s body so far?  Lori only eats 150 calories per day, she has lost 250 pounds, she purges (throws-up) between 1 and 2 times per day, and she has an irregular heart beat (which may also be from her thyroid problem, but is also her body telling her to stop throwing up).  Dr. Jonathan Levine, an excellent dentist in the area, said that her teeth are short in the back, demineralized and have even cracked.  Lori has been burning through her teeth’s enamel by bathing them in acid, which is what happens when you are constantly throwing up.

Dr. Jonathan Aviv did an endoscopy on Lori and found that her purging has caused her to tear through the lining of her larynx and everything on her endoscopy showed up a pale white color, as opposed to a normal healthy color.

The National Eating Disorder Association and Dr. Stuart Koman from Walden Behavioral Care in Massachusetts, will be helping Lori, and Dr. Oz will follow her progress.  Best of luck to Lori, we will be cheering you on!!!