Howard Cannon, restaurant expert, and Lisa Lee Freeman, consumer expert, visited a drive-thru, explaining that the actual drive-thru will tell a lot about the restaurant’s cleanliness. Upon entering the restaurant, Howard immediately noticed garbage sitting by back the door and a bucket of cleaning solution up on the counter above the food. He also noticed a toasted bun sitting out, explaining that a bun sitting out should either be cold or used.

When Howard looked at the soda machine, he noticed that it was actually pretty clean, but suggested you let a little soda stream out first, and then fill your cup to let any bacteria that was sitting in the line, drain. When looking at condiment packets, Howard explained that sometimes the seals can break, and if they do that could mean bacteria. 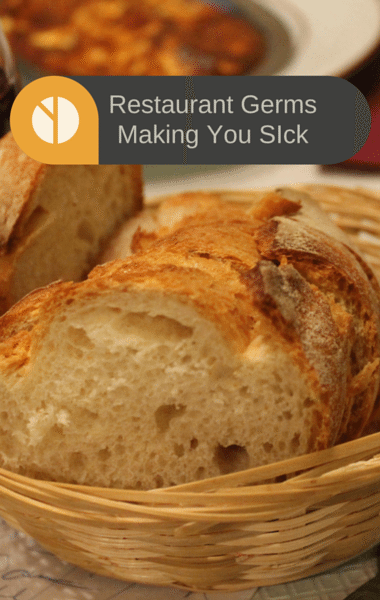 Dr Oz took a closer look at germs inside restaurants that could be putting your health at risk, and how to avoid dangerous bacteria. (ironypoisoning / Flickr)

While at the restaurant, Howard also discovered a sign that said the men’s bathroom wasn’t working. Not only was that a bad sign, but it was an actual violation. He noticed food products sitting in the kids chair as well, finally saying that restaurant in particular likely wouldn’t kill you, but eating there could make you sick. Next time you dine out, try to go during a rush hour like lunch or dinner time, because you’re most likely to get fresh food. If you do take-out, eat the food while it’s hot.

Dr Oz conducted a national survey of restaurant workers and food safety experts, and uncovered what he called the worst food offender of them all. According to the experts, the germiest place in a restaurant is the bread basket. Rory Schepisi, an executive chef has worked in a restaurant practically all her life, and said she’s seen some pretty gross things, including restaurants re-using uneaten bread for different patrons.

Rory further explained that sometimes the servers won’t wash their hands, which means they’re touching your bread with their hands, and then sometimes even adding it to baskets without napkins, which means all those bacteria-covered crumbs are collecting in the bottom of the bread basket. Sometimes, restaurants will even take the uneaten bread from bread baskets and use it for croutons, breadcrumbs, or even bread pudding.

It’s shocking how easy it can be to transfer norovirus from your own hands to another diner’s. Norovirus is actually typically the reason for food poisoning. Approximately 21 million Americans get norovirus each year, causing diarrhea, chills, and vomiting. The average person needs 1,000 particles of the flu virus to get the flu and you only need 18 particles of the norovirus to get sick.

Even more than bread baskets, you also want to think about chip baskets at Mexican restaurants. It’s important to simply be aware of everything around you when dining out!

Next, many consumers go to the dollar store in hopes of saving money, but what most don’t realize is that many of those cheap purchases, are potential hazards. Sophia Ruan Gushee, a toxic exposure specialist, explained that we should all be more worried about chronic exposure to low doses of chemicals found in household products we use every day, sometimes several times a day.

To show what you should and shouldn’t buy at the dollar store, Dr Oz had Sophia take a look at common household products. She began by saying that she typically stays away from conventional cleaning products because they tend to be toxic. She likes to clean with vinegar, cornstarch, and baking soda instead. She also uses microfiber cloths to collect dust, rather than recirculating it into the air.

Dr Oz: What To Avoid At The Dollar Store

When it comes to food storage items, Sophia steers clear of plastic and uses glass instead. You can find mason jars and glass containers at the dollar store. When it comes to kitchen ware, go for stainless steel, even for your pets. Lisa Lee Freeman, a consumer expert, then suggested avoiding off-brand batteries because they can leak and may be a waste of money. You should also avoid expired food products and cheap electronics like extension cords or lamps because they could cause shock or even house fires.