Doctor Oz did a show on Obesogens called “Obesogens: The Chemicals You’re Eating That Make You Fat.”  Before today I never had heard the word “Obesogen” but apparently they are chemicals that are hidden in your food and in your home and could be what is making you fat.  We think we know what causes weight gain (eating too many calories and not having enough exercise), but unknowingly we are eating these chemicals that are making us put on the pounds. 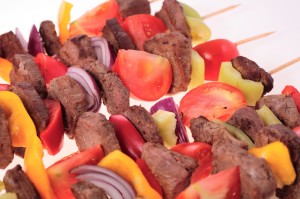 Obesogens or Endocrine Disruptors.  They promote obesity by altering the way you feel hunger and through increasing your fat cells.  Obesogens are found in additives in processed foods, in the lining of cans, even in meat and fish.  Dr Oz was joined by Robert Lustig who said that the idea that a calorie is a calorie is totally false.  Biochemical forces can promote weight gain and diet and exercise may not help for these issues.  We are seeing this problem in every developed and developing country.

Dr Oz asked Stephen Perrine who are most at risk for obesogens to effect them?  He said that children under 7, pregnant women and people who are already obese are most at risk because the more fat in your body, the more Obesogens your body can store.

1. Liver – Obesogens can make your liver become insulin resistant, which then means that your pancreas has to increase the amount of insulin that it makes by driving energy into your fat cells.

2. Brain – Obesogens block the signals that your body sends to your brain to tell you that you are not hungry any more.

3. Fat Cells – Obesogens will encourage your fat cells to multiply.

Dr Oz said that the chemicals in our environment today are not the ones that other generations grew up with.  For example, strawberries can be covered in pesticides and the chemicals can go into your body and irritate your liver and cause you to grow more fat cells.  This is yet another reason to buy organic produce!  Dr Oz did a great demo to help explain this phenomenon.  Usually your glands will talk to estrogen which will talk to fat and tell it to grow larger.  So think of three safes: glands, estrogen and fat.  If you do not have the right code, then you can’t open the next safe.  So the glands can open the estrogen and turn it on, and the estrogen can open the fat cells and turn them on.  But Obesogens are like crowbars and go straight to your fat cells, break in, and make them grow.  Dr Oz said that even the White House and policy makers are worried about Obesogens and the obesity in children.

2.  Animal Protein & Farm Raised Fish –  Animal products have Obesogens stored in their fat.  Most salmon in stores are called “Atlantic Salmon” which is a farmed salmon, which has more pesticides.  You should try to eat wild salmon, which has less pesticides.  Did you know that farmed salmon is usually white and not a deep pinkish orange salmon color (which wild salmon get from eating shrimp)?  People who raise farmed fish pick food pellets that are the color that they want their salmon to be, and the food pellets dye the salmon from the inside out.  So you are actually eating white fish that has been dyed a healthy salmon color.  Marbled meat is also a problem because it is created by feeding the animals corn and can increase Obesogens that your body stores.  You should look for hormone-free and antibiotic-free meats.

3.  Tap Water – Think about this for one moment.  Pesticides are sprayed on crops, and those pesticides go into the water table deep in the ground, which then makes its way into your tap water.  Dr Oz highly encourages everyone to get a granular activated carbon water filter (either the pitcher type that you store in your fridge or the faucet type that filters water as it comes out of the tap).