Dr Oz’s segment on Rachael Ray’s Healthy Meals On A Budget was followed-up by a discussion of Rachael Ray’s “You Won’t Be Single Long” Vodka Cream Penna A La Vodka Recipe that originally aired on Oprah’s Show.  Tons of women reported stories of getting engaged after making their future fiances this recipe, but you cannot keep making your men this creamy pasta every week – otherwise they will not be around very long.  For those of you who are curious though, or if you are looking for a special occasion recipe, click here to read Rachael Ray’s You Won’t Be Single For Long Vodka Cream Pasta Recipe .  But have no fear if you cannot make this recipe because it will ruin your diet, because Rachel Ray gave Doctor Oz a much healthier Caesar Salad Pasta Recipe that is a healthy spaghetti dish that tastes just like a Caesar Salad!

Rachael Ray’s Caesar Salad Spaghetti Recipe uses kale, which is a superfood that Dr Oz said is packed with Vitamin C.  You 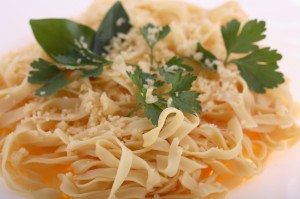 start off with a few Anchovy Fillets and cook them over low heat in a pan with some extra virgin olive oil.  Rachael Ray said that if you think you do not like anchovies, then  you are probably wrong.  As soon as you cook the anchovies in some olive oil, they melt away and there is no longer any “fishy” taste.  Then you add some garlic and black pepper to the pan and wilt the kale in the mixture.  In a separate bowl, you whisk together a couple of egg yolks and temper it with a cup of the starchy pasta water (leftover from boiling the spaghetti).  Add your cooked whole wheat pasta to the pan, along with the tempered egg and some Pecorino Romano Cheese and a touch of nutmeg.  Finish it off with the juice from a lemon.  Click here for the full recipe: Dr Oz: Rachael Ray Caesar Salad Spaghetti Dinner Recipe