Dr Oz did a segment with Rachel Ray called Delicious Healthy Meals On A Budget.  This is not the first time that Doctor Oz has had Rachael Ray on his show though, you can read her recipes and hints from last time here: Dr Oz & Rachael Ray Eating Healthy and Dr Oz & Rachael Ray Healthy Recipes.  On this episode, Rachel Ray taught Dr Oz how to make a French Toast Cup Recipe, a Spinach Artichoke Tuna Salad Recipe, a Chicken Thigh and White Bean Salad Recipe, and a Caesar Salad Pasta Recipe.  Dr Oz said that he knows that food prices are at the highest levels they have been in decades, and all of us are trying to cut corners to put food on our tables.  But this does not mean we cannot eat healthy foods.  How can it be that some stores are now selling beef for $6 / pound, milk for $5 a gallon, and eggs for $3 / dozen?  Well, as gas costs increase, it becomes more expensive to deliver food to groceries and that increases the prices we pay for the food.

Rachael Ray told Dr Oz that you have to be clever when you go grocery shopping.  Every week your grocery store will have a Loss Leader in the produce section, the meat section and the fish section.  And 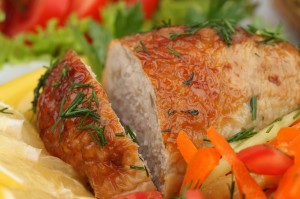 these Loss Leaders are supposed to attract people to come into the store and buy other things that are not on sale, because the store sells these sale items for basically the same price that they pay for them.  So the week that broccoli is cheap and on sale, buy extra, blanch it in boiling water and freeze it.  You can make your own big batches of vegetables to store in the freezer.  Beans and grains are another great way to stretch your budget.

Rachel Ray said that another great money saving tip is to use coupons.  She has brought on several Extreme Couponing Show Women to teach her all about the method behind grocery store coupons.  It is so much easier with the computer and the Internet, because there are websites where you just enter your zip code and it brings up all of the grocery store coupons that you might be interested in.  One of the ladies from the Extreme Couponing Show was able to pay for all of the ingredients that Rachael Ray made on one of her shows, and the store ended up paying her $6!  Mighty impressive.

Rachael Ray told Dr Oz that she is now 42-years-old and she is more health conscious than ever.  She never used to eat breakfast, but now she always eats 30 grams of protein within 30 minutes of waking up.  For example, Rachael Ray will eat for breakfast a 6 ounce steak, a piece of chicken or her favorite – lentils, scrambled eggs and greens.

Rachael Ray told Dr Oz about her Budget Breakfast – a French Toast Cup Recipe.  She said that you should never throw away stale bread, because it makes wonderful French Toast Cups.  You just cut half way through the diagonal of a stale piece of a bread, dip it in egg batter, stuff it into a muffin tin and bake them.  Then you can fill the French Toast Cups with lots of great healthy ingredients like lowfat Greek Yogurt and fresh fruit.  Drizzle the top with a touch of real maple syrup, agave nectar or honey, and  your whole family will love them.  Click here for the full recipe: Rachael Ray French Toast Cup Recipe .  Rachael Ray said that you can even eat them in the car, though I think that is a bit too messy for my taste!  The estimated cost per person for Rachael Ray’s Budget Breakfast was just $2.  Another great tip is to make your own yogurt rather than buying it pre-made at the grocery store.  Click here to read how to make your own yogurt: Cuisipro Donvier Yogurt Maker Review.

Rachael Ray’s next recipe for Dr Oz was a Budget Lunch.  She said that one of her friends, Jose, was diagnosed with Diabetes recently and started to bring his own lunch to work instead of going out.  And guess how much money he saved in just one month? $400 – pretty amazing!  Since everyone loves Spinach Artichoke Dip, Rachael Ray put together a Spinach Artichoke Tuna Wrap Recipe.  You mix together defrosted artichoke hearts, frozen spinach (thawed and drained), lemon juice and olive oil – no mayo at all in this tuna recipe.  Then pack in a separate container some Romaine Hearts, and during lunchtime you can make your own Spinach Artichoke Tuna Salad Wraps by filling the lettuce leaves with scoops of the tuna salad.  Click here for the full recipe: Dr Oz: Rachael Ray Spinach Artichoke Tuna Salad Recipe

Rachael Ray’s Budget Dinner was a Chicken Thigh Recipe with a warm cannelloni bean salad, which has lots of fiber and protein.  To make the warm white bean salad, you just cook in a pan some garlic, crushed red pepper and extra virgin olive oil.  Add the white beans and lots of rosemary and parsley.  Then grill up some Boneless Skinless Chicken Thighs, and serve it with the white beans and a tomato onion salad.  If you do not like Chicken Thighs, Rachael Ray told Doctor Oz that you can also substitute and Loss Leaders that the grocery has on sale that week – tuna, flatiron steak, flank steak etc.   This Budget Dinner costs around $5.60 per person.  Click here for the full recipe: Dr Oz: Rachael Ray Chicken Thigh & White Bean Salad Recipe

Dr Oz pointed out that with Rachael Ray’s Recipes, you can cook all of these healthy meals for a person for just $10 per day.  I’d love to hear your favorite healthy, budget meals!  Please share your ideas with everyone in the comment section below.