Dr Oz: How To Restart Your Body

Have you been wanting a redo on your bad habits? Do you want the chance to reverse the damage to your health and restart your body? This is your chance, and Dr Oz had just the ticket to get you going.

Dr Oz kicked off this episode from Ellis Island, which was symbolic because he wants viewers to have to opportunity to change their lives, as immigrants to Ellis Island have done through the years. “It is never too late,” Dr Oz said, introducing this episode’s Total Body Restart.

He and 200 women traveled with him on a ferry from Ellis Island back to his New York City studios. There was lots of cheering, yelling, and fake running, and suddenly we were in the studio, with everyone in the audience wearing purple gloves. 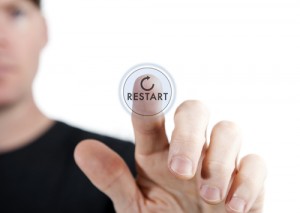 Dr Oz promised viewers the chance to restart your body and asked his audience about the organ damage they want to reverse for better health.

This episode was special because each member of the audience would hold an organ in their hands. That would be the organ they most wanted to restart. Dr Oz said that our organs can really start to wear down through the years. The average heart has beaten over one billion times by age 35, and digestive processes aren’t as streamlined due to processing over 70,000 pounds of food.

The thyroid, which is associated with weight and metabolism, slows at a rate of 20% per decade, slowly adding pounds to your body each year. But Dr Oz promised he would explain how we could all restart our bodies right now.

Dr Oz met with Emily in his audience, who held a heart in her hands. She chose this as the organ she’d like to restart, because she is now 45 years old, and as a Latina is at risk for Heart Disease, which runs in her family. After losing her mother and grandmother to heart attacks, she wants to stay healthy for years to come.

Emily admitted she doesn’t exercise or eat in the healthy ways that she could. Dr Oz told her she would have the chance to take control and take advantage of her opportunities. He said that many of us reach points in life where we know we need to make changes.

The whole audience held their organs in their purple gloved hands. He said the organs represent life and the power we have to take charge of our health.

Trina chose the thyroid as the organ she’d like to restart, because she said she is low on energy and has gained a lot of weight in her late 30s. She said her mother had Thyroid issues, and wondered if that could be genetic.

Dr Oz said the Thyroid is a “scarily common reason why women gain weight, feel tired, don’t look as pretty as they want to be, why we actually age.” He told Trina not to blame herself, and promised to help her learn how to restart her Thyroid.

Another woman chose the intestines as the organ she’d like to change, because she has Irritable Bowel Syndrome, and would like to avoid flare ups. Some foods can “send your body into a tailspin,” but Dr Oz promised that small fixes could get you back on track as well.