In this segment, Dr Oz brought out celebrity chef and restaurateur, Michael Symon. (You may also recognize him as an Iron Chef on The Food Network.) Michael let Dr Oz Fans know that gluten may not be the only thing in your restaurant that’s making you sick. After he reveals the real deal with restaurants, you may never eat out the same way again!

You ordered your favorite dish and anticipated a good meal, but do you know what lurks behind the kitchen doors? 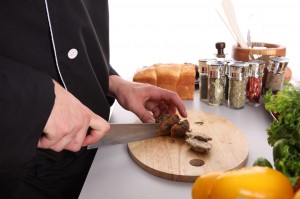 Dr Oz gathered 4 anonymous waiters to give you the deal. Some of secrets they admitted included:

-Avoid eating fish on Mondays, it’s not fresh.
-Servers don’t use gloves, even after going to bathroom sometimes.
-They rinse off—not wash—plates if it’s really busy.

Michael Symon, the host of, The Chew, has 8 restaurants. He told Dr Oz that restaurants cut corners. You need to know your restaurant and your people. They cut corners with labor and food costs by reusing. Remember, you get what you pay for. If deals are too good to be true, they typically are.

-lemons are as dirty as the floor. They carry bacteria from hands etc… The Doctor Oz Show tested lemons from 5 restaurants. 5 of 5 were germy and contained mold bacteria, candida yeast commonly found in the mouth. (Okay, about to throw up here!)

Solution: get your lemon on the side (and apparently leave it on the side)

-if the bathroom is dirty, the kitchen is even dirtier. Michael suggested judging the restaurant by the staff and the bathroom.

Solution: try to get to the buffet early, but you’re still getting the same boxed eggs, however, you may eliminate the bacteria factor. (One can only hope!)

-if you order caffeinated coffee past 8 pm, most likely it’s decaffeinated. Servers get lazy later on in the evenings and just make a big pot of decaf. Michael said even his restaurants do this.

Solution: go for espresso, it’s made just for you.