If you’re a frequent flyer, you’ll want to pay attention as Dr Oz reveals some of the secrets he believes you should know. First, there’s actually only 15 minutes worth of oxygen in the oxygen masks on board. David Souci, an aviation safety expert, explained that you really only need oxygen until the plane gets down to where you can breathe normally without the masks, which is at about 10-12,000 feet.

The problem, is that if there’s a fire on board, once you reach 10,000 feet, everything is oxygenated which can cause the flames on board to grow. The fire has to be taken care of first, before the plane can descend, which is why there’s about 15 minutes worth of oxygen. 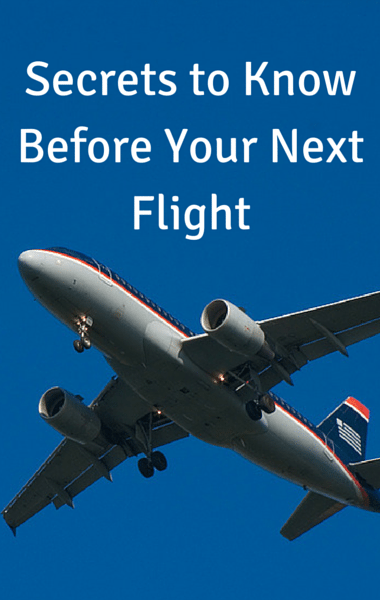 Dr Oz learned more about airplanes, including where the safest seat is and just how dirty planes really are. (andrewmalone / Flickr)

To get the oxygen started, you have to pull pretty hard on the mask, which releases a pin, starting a chemical reaction. The chemical reaction is what creates the oxygen, because you can’t have oxygen lines running through an airplane. Within 15 seconds, if you’re flying at 30,000 feet, you need to get those masks on.

One of the most frequently asked airplane questions is about the safest seat. It’s true that there are some places that are safer to sit than others. David explained that no accident is the same, but the majority of airplane accidents actually have survivors. You have a one in a nine million chance of dying in an airplane accident.

If you’re flying first class, you’re in the most vulnerable place for an impact accident. The wings are the strongest part of the airplane, but the further back in a plane you are, the better chance of surviving an impact accident.

In a water landing, the middle of the airplane is safest, especially near an emergency exit. Statistically, overall, the seats in the back of an airplane are the safest. When flying, you also want to be sure to wear a good pair of shoes and non-flammable clothing.

Dr Oz then shared a viral video of a concept that people came up with for an airplane where passengers are in a separate capsule that can separate from the engine and parachute to safety before landing on an inflatable bottom, allowing passengers to safely escape danger. Sounds like a brilliant idea, but is it actually possible?

David is the author of “Safer Skies.”

Next, just how dirty are airplanes? He sent his medical team to find out, and they looked at the head rests, seatbelt, the tray table, and the flush button in the bathroom. So which do you believe is the dirtiest? I would guess that the tray table is the dirtiest, but his audience believed it was the bathroom flush button. The answer was actually the head rest, because they clean everything else! However, there was another study that showed the tray table was eight times dirtier than other places tested.

Dr Oz then welcomed a former flight attendant, Hollis Gillespie, who is now a travel expert. She explained that sometimes flight attendants don’t have enough time to clean an airplane between flights. Hollis and Dr Oz shared some pictures posted by flight attendants, showing just how gross passengers can be. While one passenger left dirty baby diapers all over the floor and another passenger had their bare feet up on the tray table.

Another passenger left cotton swabs in the seat-back pocket, which led Hollis to say you should never stick your hand inside that pocket without checking it first, because you never know what you’re going to find.

Dr Oz then revealed that the blankets given to passengers on an airplane aren’t always washed. If it’s wrapped in plastic, it’s clean. But if you are handed a blanket without a plastic wrap, there’s no telling where it came from. Dr Oz took a blanket given to him by a flight attendant and put it under a black light, showing just how many germs are on it. Gross!

Dr Oz also shared that a study found that 60% of tray tables tested positive for MRSA and Norovirus. Dr Oz recommended that all passengers wash their hands and then wipe down anything you can come into contact with. Also, bring your own blanket!