Doctor Oz did a segment on sleep eaters, who are people that get out of bed while they are asleep, and binge on unhealthy foods like they haven’t had anything to eat in days, all while they are still asleep! Approximately one million Americans are sleep eaters, which is dangerous not only because of the extra calories and fat you are consuming in your sleep, but some people will even eat dangerous things like cigarettes or toxic cleaning products. The guest on Dr. Oz’s show said the most bizarre thing she ever ate in her sleep was a steel wool cleaning pad, and it was only when her nephew told her about this that she realized what was going on.  Very often, people who do sleep eating are either on restrictive diets during the day or prescription sleep pills. 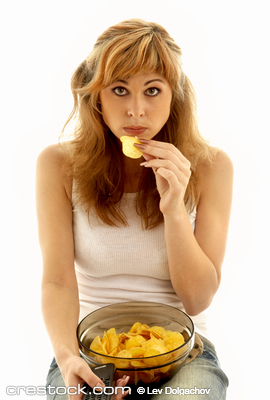 Doctor Oz brought Scott Eveloff, a sleep disorder expert, onto his show to teach us about sleep eating.  When you are sleeping at night, you will go from stage 3 (a deep sleep) to REM sleep which is when you are having dreams.  Usually, when you are having REM sleep, you are paralyzed so that your body doesn’t act out your dreams.  However, if things are not firing correctly in your body, then you won’t be paralyzed and you will be able to act out and move while you are still asleep… and this is when sleep eating can occur.  Up to 1% of the adult population in America could be sleep eaters, do any of these sound like you?:

1.  Women age 25-50 are more likely to be sleep eaters.
2.  Gorging on high calorie foods while you sleep is a sign.
3.  Sleepwalking often is another sign.
4.  If you take sleep aid drugs, this is the final sign.

Another guest on Dr. Oz’s show was Diana, who has a 13 year old son, and she realized she was a sleep eater 10 years ago.  She eats in her sleep once or twice a week, and it is almost always junk food.  She feels very guilty, especially because her own son has to hide his candy from her so that she won’t eat it in the middle of the night.  Diana said it is like having an alter ego, and she has even considered handcuffing herself to her bed.  Scott Eveloff said that Diana is the textbook case of a sleep eater.

Scott Eveloff said that sleep eating is treatable, but sleeping pills are not the answer.  First treat any secondary factors like sleep apnea, leg kicks, stress etc.  Then there are specific medications that your doctor can give you.  Dr. Oz made sure to clear up that day time eating behaviors do not impact sleep eating, so this is not an excuse to not diet or to not eat healthy during the day!