If you’re constantly worrying about money and your finances, Dr Oz held his very own credit clinic just for you! Money is the number one driver of stress and according to Dr Oz, stress is the number one driver of poor health. He teamed up with personal finance guru Ric Edelman, who assessed Dr Oz’s entire audience’s financial standing, while Dr Oz and his medical team assessed their health, to see if they were related.

So how big of an effect was money having on their health? During the “Credit Clinic,” Dr Oz’s staff noticed that a woman named Michelle’s blood pressure was elevated. Ric came over to speak with her, and found that her 26-year-old daughter moved back him, causing her to have to stretch her income. She’s also worried about her retirement. 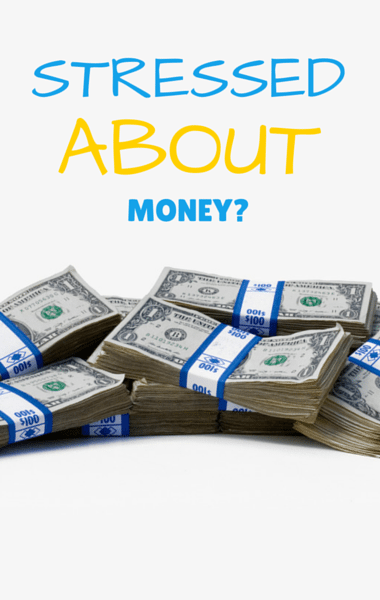 Are you so stressed about money that it’s begun affecting your health? Dr Oz and Ric Edelman had some great tips to overcome your financial woes. ([email protected] / Flickr)

Another woman named Sandy put her stress level at the highest level, then explained that she was tackling $20,000 in credit card debt and has a hard time saving money with things constantly popping up. Her goal was to save for her kids’ college funds.

Ric then explained that we need to give ourselves permission to realize that things are within our control, as long as we take positive actions and small steps. Rick revealed that he and his wife actually started out with very little money, scraping at the bottom of the bucket, and he was able to turn things around.

They then turned back to Michelle, who said she’s been overwhelmed. Dr explained that it is possible, no matter how hard it may seem, to have “money woes and not let it affect your health.” Michelle said she couldn’t believe how high her blood pressure was, and needed to realize “it is what it is.” Her blood pressure was 183/114, and Dr Oz said a number that high makes him worry about strokes and heart attacks.

The number one cause of bankruptcy in America is health problems, which means it’s important to fix both. People who stress the most about money tend to have higher blood pressure and a bigger waist.

Dr Oz then turned to a Mind-Body expert who suggested Michelle try “breath mapping.” Theres a worry breath and a mindful breath. Gently put your hands on your stomach and if you notice that your stomach is pulling in while your shoulders are coming up, that’s a worry breath. Instead, let your stomach relax, and try to breath as if you stomach is slowly filling up like a balloon.

Dr Oz: Are You Trying To Do Too Much?

Ric Edelman then added that she needed to realize that she was simply trying to do too much, which of course comes for her love for her daughter. She’s a college graduate, 26-years-old, who is contributing nothing money-wise. He explained that not only is it destroying her finances, but it’s hurting her health as well. Her daughter needed to realize that she was feeling too entitled and she had to contribute to the household.

Dr Oz and Ric then turned back to Sandy, who said she felt trapped and would even lie awake at night trying to come up with a solution. Dr Shelby knows first-hand that stress can keep you up at night, which is why she suggested setting aside “worry time” at night. About 3-4 houts before bed, get out a piece of paper and make two columns. On the left side write your worries, and on the right side, write out the next step for that worry. Take that piece of paper and put it in a drawer next to your bed, and look at it anytime you’re stricken with anxiety.

Ric Edelman explained that it’s the smallest changes that make the biggest differences. As an example, he said if you go and buy a cup of coffee from America’s favorite coffee chain, every morning for 40 years, that adds up to $400,000 less in your retirement. Literally every penny counts, and help the big issues melt away.

Dr Oz: What Matters More Than Your Credit Score

There are three things that money experts agree matter more than your credit score. One woman’s base heart rate was 63, but right before she checked her credit score, it went up to 89. But she admitted she felt relief once she actually knew what it was, although not great because it wasn’t the best score. Ric Edelman said that’s common with most people, who later realize it really wasn’t that bad.

Ric explained that what matters more than your actual credit score is how many credit cards you have and whether you’re adding to or subtracting from your balances. You should have no more than three credit cards and know exactly how much credit you have, and pay the minimum payment every time on time. Ric said that will show to the creditors that you’re in good standing, which will improve your score. Once you do that, then apply extra money to the card that has the highest interest rate. Never be late on a payment or miss a payment.

Do you feel more confident to tackle your financial woes?