Doctor Oz did a test on the his segment on Vitamins & Supplements to test if a vitamin and supplement is effective by heating the pill in a vinegar bath.  Dr Oz said since most Vitamins and Supplements are not supposed to be slow release, you can do this test at home to check to see if your body can actually absorb the Vitamins and Supplements that you take.  The reason Dr. Oz’s vinegar test works is because the vinegar mimics the acid in our stomachs, so if the vitamin and supplement do not dissolve in the vinegar, then they will not dissolve in our stomach either. 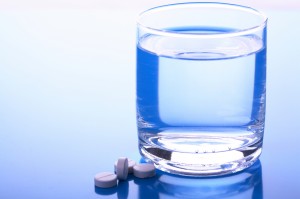 2.  Add your Vitamin or Supplement to the warm vinegar.

3.  Let the Vitamin or Supplement sit for 30 minutes – if it dissolves, then your body has a chance to absorb it, otherwise time to buy some new Vitamins and Supplements!