Doctor Oz did a show called “What’s in the Nation’s Chicken?”  Do you know what is in the chicken you and your family are eating?  Your chicken could contain Roxarsone, an organic form of arsenic!  Dr Oz said that today’s chickens are bigger than they have ever been, because of the drugs and antibiotics we are pumping into them.  Dr Oz put America’s chicken in the truth tube, and I am sure that tons of people were shocked.  I have personally been buying strictly organic chicken for the past half a year or so, but now I am going to be even more careful about eating chicken at restaurants where the chicken is not organic. 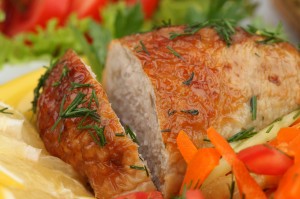 Dr Oz knows that when we walk down the grocery aisle for chicken there are tons of options: roasters, chicken nuggets, breasts and thighs.  Apparently, there are only 4 companies that supply 50% of the supply of chickens in this country.  And as Dr Oz said, Old McDonald is a bio-engineer now.  Chickens are given Roxarsone, an organic arsenic, kept inside with no sunlight and are crowded so that they cannot move and will grow faster.  Then when the chickens reach 5 pounds they are sent off to be killed, injected with salt and shipped to your grocery store.

Dr Oz said that in addition to Roxarsone, the following are often pumped into chicken that we eat: Monosodium Glutamate, Sodium Erythorbate, Trisodium Phosphate (a cleaning agent) and salt.

Dr Oz said that in the 1950’s, a typical chicken weighed 3 pounds.  Now, chickens typically weigh 5 pounds.  Urvashi Rangan from Consumer Reports said that they ran a lot of tests to see why chickens are so much larger now than just two generations ago.  After WWII, America began to optimize chicken to have more breast meat, thigh meat and to grow larger in general.  However, at the same time, they noticed that if you are going to pack chicken in tight quarters, you have to also give them antibiotics to keep them well.

Dr Oz thinks that the biggest change in chickens is that now many chickens get antibiotics in their daily feed, regardless of whether or not they are sick.  David Kessler, author of The End of Overeating, said that antibiotics are used in chicken feed for three reasons:

– To increase the chicken’s growth rate

And this last one is the biggest concern to Kessler, because using antibiotics to increase a chicken’s size is an abuse of antibiotics and can increase drug resistance.  Back in the 1950’s, it took chickens 85 days to reach maturity, whereas now, chicken’s reach maturity in 47 days.  The way corporate America looks at it, the bigger the chicken and the faster it can get to the large size, the more profits for them.

Dr Rangan said that Consumer Reports did a study on Antibiotic Resistance and found that the following antibiotic resistance in bacteria in chicken: Tetracycline, Amoxicillin, Ampicillin and Ciprofloxacin.  Dr Oz said that Ciprofloxacin is one of the most powerful antibiotics that we have, so its very scary that 2/3 of the pathogens found were resistant to one or more of these antibiotics.  Dr Oz also said that we are unable to find out exactly how many antibiotics are given to chicken.  While the FDA and CDC have given careful guidelines to restrict the overuse of antibiotics in the food supply chain, there is definitely a large concern that these restrictions simply are not enough.

Dr Oz said that Roxarsone is given to chickens to prevent them from getting sick, but it is also a growth promoter and has the side benefit of adding a yellow color to the chicken’s skin.  Several benefits of Roxarsone are that it shortens the time of getting the bird to market weight and it treats parasites to keep the chicken healthy.  While organic arsenic is currently considered relatively safe, we all know how dangerous inorganic arsenic is.  We have to weight the benefits (like preventing parasites such as Salmonella) with the risks.

Dr Oz finished by saying that he has no doubt that our behavior as consumers drives the chicken industry.  So if we buy organic antibiotic free chicken, it will shift the industry, but of course the FDA can and should be tougher as well.  For now though, we have to look out for our own good and not depend on agencies like the FDA.  So jump on the bandwagon with me (and Dr Oz) and only buy Organic Chicken!