Doctor Oz did a segment on why people love or hate certain foods. Gary Vaynerchuk, an expert on the mystery of taste, joined Dr Oz. The first type of food that they tested was a bowl of mashed turnips. Some people strongly hate turnips, because the bitterness really bothers them. These people are called super-tasters. There are also non-tasters, who tend to like mashed turnips because they do not taste the bitterness. And there are average tasters, who are basically ambivalent. Supertaster strips can be used to test if you are a super-taster, average taster or non-taster. If you are a supertaster, you should try sauteing your vegetables to take out the bitterness. 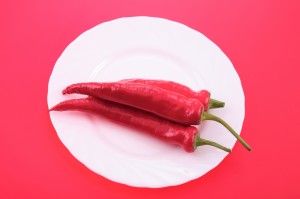 How about guacamole? Do you strongly dislike the taste of cilantro? Cilantro has aldehydes which makes it have a strong odor. If you do not like the smell, then you won’t like the taste of cilantro apparently. However, if you crush up cilantro before using it, the smell changes and the aldehydes are transformed. Perhaps now I can finally get my father to eat cilantro! I love guacamole with cilantro personally, but it is tough when your loved ones are not such big fans of an ingredient.

Very spicy vegetarian chili has chili peppers in it, which does not affect non-tasters in the slightest. But if you are a supertaster, the spiciness can cause a strong hatred towards it – which is exactly what I have, I cannot stand super spicy foods. There is a nerve that runs along the side of your face, and in certain people the nerve is irritated by the capsaicin in spicy peppers, which makes your eyes water and salivate. A great solution for spicy foods is to use milk, ice cream or sour cream to stop the burning sensation. Dr Oz also said that citrus works well to cut through spiciness.