Charlamagne Tha God is one of America’s go-to radio hosts, known for setting the record straight daily on The Breakfast Club for iHeartRadio. As Dr Oz explained, Charlamagne “came from humble beginnings.” He was born Lenard McKelvey and grew up in a small town in South Carolina. As a troubled teen, he spent too much time with the wrong crowd and even ended up jail several times.

When he realized he needed to make a change, Charlamagne enrolled in night school and became an intern at a local radio station. He then went on to become a familiar face on the media scene. He had TV and movie roles as well as hosting gig on MTV 2. Charlamagne credits his success to hard work, authenticity, and getting healthy. Dr Oz welcomed Charlamagne to his show. 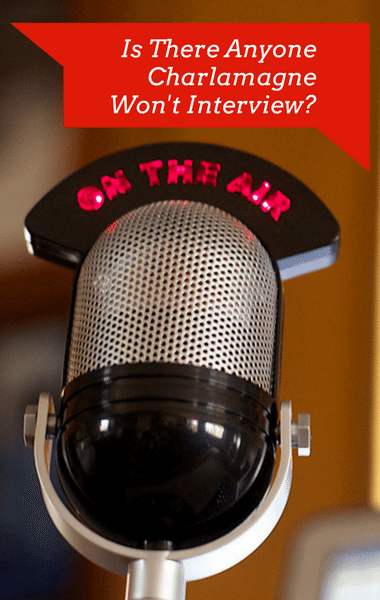 Dr Oz welcomed radio show host Charlamagne the God to hear about how he’s now living the good life and whether there was anyone he wouldn’t interview. (cogdog / Flickr)

Dr Oz had his set changed around a bit to look like a radio station, allowing Charlamagne to feel a little more at home. Charlamagne is known for speaking his mind so it’s no surprise that he’s “mixed it up” with the likes of Hillary Clinton, Nicki Minaj, and Diddy. For him, it’s important to be brutally honest, but with yourself first. He believes honesty is always the best policy.

Charlamagne also explained that it doesn’t matter who he’s interviewing, he’s going to ask whatever is on his mind. For example, when Dr Oz was first interviewed by Charlamagne, Charlamagne asked if he had ever gotten intimate with Oprah Winfrey. He claims he asks the most obvious things, that people are already talking about.

Dr Oz: Is There Anyone Charlamagne Wouldn’t Interview?

As for whether there was anyone he wouldn’t want to interview, he shared that he was recently offered a chance to interview a 13-year-old girl who had been getting attention for all the wrong reasons. It was the “Cash Me Outside, How ‘Bout Dat” girl. He refused saying there was nothing he had to talk to her about and wasn’t into “the circus.”

Dr Oz then pointed out that so many of us are told to follow our dreams, but Charlamagne believes we should sometimes “F” your dreams. For him, his images of success as a child were rappers and athletes, and he tells so many kids to “F” that dream because it’s not their dream, they just see it working for someone else. In reality, they should realize their full potential and learn what they were put here to do.

When he was younger, Charlamagne wanted to be a rapper. His rap name was Dizzy Van Winkle. But somewhere along the line he realized it wasn’t for him, and radio felt effortless to him. However, Charlamagne got fired four times from radio stations for various reasons. He claims only two times out of the four were actually his fault. The last time he got fired, a good friend told him to spend time at home because it would be the one time he would have to do so, while God moves him in another direction.

Fortunately, he’s never done anything off-air to get himself in trouble, because “I treat the custodian the same way I treat the CEO.” He believes every time he’s gotten fired he’s ended up in a better place.

He also shared that he believes he’s living a good life now because he’s not wasting any potential God gave him. His father would always tell him if he didn’t do what he was supposed to he would end up dead or broke sitting under a tree somewhere in South Carolina. But now he has a successful career, a wife, and beautiful kids. As for the kids he was running around with as a kid, a lot of them are now dead, in jail, or broke sitting under a tree.