Holly Robinson Peete and Rodney Peete seemed like the perfect celebrity couple. They welcomed the birth of their twins just two years after getting engaged. When their son R.J. turned two, Holly and Rodney noticed something was wrong. He was having trouble making eye contact and stopped responding to his parents. Doctors diagnosed R.J. on the Autism spectrum. R.J.’s diagnosis inspired the family to create the HollyRod Foundation, to provide support and resources for families affected by Autism. Holly and Rodney joined Dr Oz to talk about their journey.

Holly and Rodney are celebrating their 20th wedding anniversary. Holly explained that when they first noticed something wasn’t right, R.J. withdrew from his twin sister and disconnected. He stopped answering to his name and when Holly expressed concern, Rodney believed it was just a boy thing and he would grow out of it. 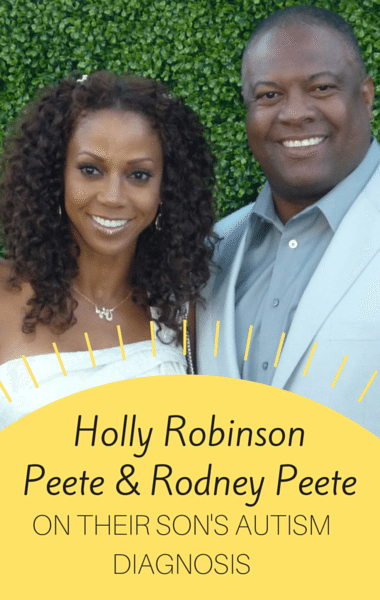 Dr Oz sat down with Holly Robinson Peete and Rodney Peete to talk about their son, who was diagnosed with Autism. (habesha / Flickr)

Early signs of Autism are when a child doesn’t make eye contact, doesn’t smile when they’re smiled at, doesn’t respond to their name or respond to cuddling, and doesn’t reach out to be picked up.

Holly and R.J. saw a specialist, and they refer to that day as “the never day.” They were told by the doctor that R.J. would never look them in the eye, never mainstream, would never say I love you, would never live on his own, and would never play sports. They didn’t see anyone else having a national conversation about children with Autism, so they cried a lot and had a hard time, until they “rolled up their sleeves” and decided to advocate for R.J.

While Holly educated herself on Autism, Rodney became determined to fix it. Rodney admitted he was doing all the wrong things, which caused friction in their relationship. Holly went into “crazy mama mode.” She would get down on her knees and do “floor time” to help him interact, and was constantly in R.J.’s face. Because Autism is all about the small wins, Holly and Rodney would notice the little things. They would be thrilled in R.J. even just rolled his eyes at his sister or got annoyed with his brothers.

Another thing they did that made a big difference for R.J. was take him to an allergist to find out what his sensitivities were. They learned that he and his twin sister had high gluten sensitivities, and noticed that whenever R.J. ate gluten and wheat, he disconnected more. They removed gluten from his diet, which helped a lot, as did other things.

Dr Oz then showed Holly and Rodney a video from their four kids, as they thanked their mom for everything she does for them. R.J. is now a high school senior and tells his parents he loves them all the time!

Dr Oz: How Holly & Rodney Peete Cut Back On Stress

Holly and Rodney are now allowing cameras follow them around for a new series For Peete’s Sake. There’s no doubt the family is entertaining, but things can certainly get a bit hectic around their house. To save time and effort, one of the things Holly likes to do is make a beef stew in the crock pot. She also likes to make chicken pot pie using a store bought crust, because it’s a recipe the whole family loves! Her kids absolutely love meatballs as well, which is why she’ll make a bunch ahead of time, stick them in the freezer, and then pull them out in time for dinner!

For all the sporting events Holly and Rodney go to, they stock their car. They keep a chair, umbrella, sunscreen, snacks, and water on hand at all times. Dr Oz then surprised the couple with a bottle of wine and a jazz CD to help them cut down on stress and up the romance.