Is pot any worse for the body than caffeine, alcohol or tobacco? That question is the topic of today’s Dr. Oz Show as he discusses whether or not weed is addictive and if it could be harmful to the body when used for a long period of time.

Dr. Oz says 111 million Americans have smoked marijuana at least once in their life, with 19 million admitting they smoke it on a regular basis, but at what cost? Before even considering whether or not pot is addictive, there are a couple things that concern Dr. Oz about regular pot-smoking. 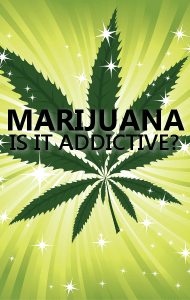 Dr Oz sat down with Dr Paula Riggs and Dr Carl Hart to discuss how marijuana affects the brain and whether you can become addicted to pot.

Aside from the physical implications for those who smoke pot on a regular basis, there is also concern as to whether you could become addicted to it. Dr. Paula Riggs believes that marijuana is addictive, but Dr. Carl Hart disagrees and argues that pot is no more addictive than caffeine. Dr. Hart went on to say that while you can become dependent on both things, they are not as dangerous as becoming addicted to alcohol, which can cause death. Dr. Riggs says pot is clearly intoxicating with noted withdrawal symptoms for chronic users who suddenly stop smoking it.

Dr. Carl Hart says while he agrees that there are withdrawal symptoms, they are no less harmful than withdrawal from caffeine. He added that withdrawal from alcohol or heroin is more life-threatening, so he believes you cannot make an equal comparison.

Dr. Paula Riggs expressed concern over the fact that marijuana is often looked at as a benign recreational drug when in reality the science shows it to be neuro-toxic, especially for adolescent kids. Dr. Hart says he absolutely does not encourage young people and kids to use marijuana because just like alcohol, caffeine and tobacco it is clearly bad for their developing bodies, but he points out that none of the latter have been banned, so he sees no reason why pot should be. Dr. Hart’s bigger concern than potential addiction to marijuana, even in young people, is how the drug affects a person’s ability to function in their everyday life because that is when it truly becomes a problem. He says just like with any other outside factor, such as a boyfriend or girlfriend, if pot smoking begins to interfere with someone’s ability to reach their goals or perform well at school or work, that is when we should become concerned.

Dr. Oz says that as a doctor he believes marijuana can play a therapeutic role in a person’s life as long as we carefully control its use. He also believes that long-term use of pot can lead to an addiction and he strongly believes we need to become more aware of the risks as it becomes legal across the country. Dr. Oz ended by saying marijuana has a place in medicine, but not in our kitchen cabinets and especially not in school lockers.