Keke Palmer is just 23-years-old and is the youngest actress to receive a Lead Actress SAG Award nomination. She also starred in, wrote, and performed the theme song for Nickelodeon’s True Jackson, VP.  She’s the first African-American Cinderella on Broadway and the youngest to have her own talk show. She joined Dr Oz to open up about her struggles with anxiety and depression.

Keke actually joined Dr Oz on an episode of Watch What Happens Live and got a chance to speak with him backstage. Keke explained that she first wanted to try to explain what she was feeling around the age of 15. She came across the words “stress,” “anxiety,” and “depression.” 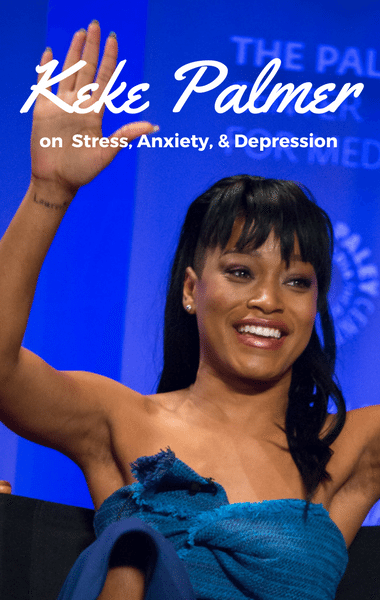 Keke Palmer opened up to Dr Oz about her struggle with stress, anxiety and depression even during a successful career on television. (idominick / Flickr)

Keke began acting when she just a child and explained that she felt a lot of pressure to be a certain someone and try to hard parts of herself. When she was 17-years-old, she finally told her parents she wanted to see a therapist, which isn’t openly talked about in her town. Instead if you’re depressed, you’re “lazy.”

Finally, Keke realized she couldn’t communicate effectively with her parents about what was going on with her, so she sought outside help. Keke wrote about her experience in her new book “I Don’t Belong to You.” Dr Oz shared that he actually got slightly emotional thinking about how mature Keke sounds in the book. She makes so many profound statements in the book that would inspire and touch anyone in any situation.

Keke then got emotional herself explaining that she allowed the industry to make her think that she couldn’t be a musician and that it wasn’t for her. She allowed them to steal her love and joy of music from her, and now realizes that turning her back on music was the “biggest heartbreak of her life” because of what people were saying to her.

Keke wanted to make it clear that the look of perfection in Hollywood is a facade because she’s anything but.

Keke’s mom was in the audience and was clearly emotional, but shared that her daughter has always been an optimistic person. Fortunately, a lot of Keke’s optimism has rubbed off on her. She began crying as she told Dr Oz that she would look at her energetic daughter and think “I got to be a better mother. I got to be a better manager.”

Keke’s mom admitted she would go into her room and cry because she didn’t know how to get people in the industry to understand what she wanted, but Keke would always reassure her that everything be okay. But now she’s able to look back and see that they made it! More than anything, Keke’s mom wanted her to know how proud she was. She said to her daughter “Don’t let anyone’s perception of you be your perception of yourself.”

One of Keke’s secrets for managing her stress is journaling. She first started journaling when she was 12 or 13 and it taught her a lot about herself. She was also about to find a lot of peace. If journaling is new for you, don’t put pressure on yourself. There are no expectations. Simply try it and write down whatever comes to your mind. You can also write out your goals or write specific actions. Whether you write a note or pages full of notes, it can give you a lot of insight down the road. Keke’s also a fan of yoga for her stress!

As for foods that help fight anxiety, Keke is a huge fan of crunchy chick peas, dark chocolate with quinoa, and chamomile tea with ginger.