Marie Osmond is a singer and actress who literally grew up before everyone’s eyes. She’s the only girl in a musical family and rose to fame in the 70’s as she and her brother Donny became teen idols. They’ve been performing for audiences for decades. But behind the scenes, Marie suffered from several health issues, survived the death of her 18-year-old son, and struggled with body image issues. She was ready to sit down with Dr Oz to talk about remaining resilient through it all. 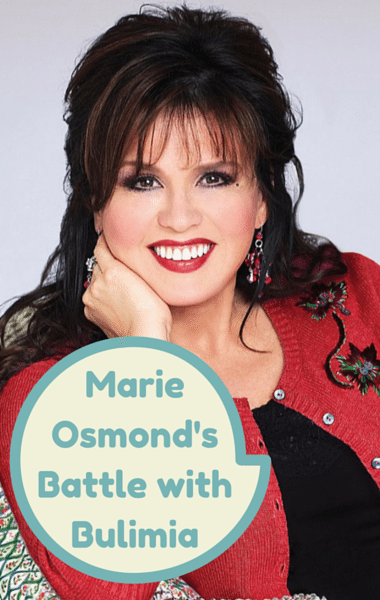 Marie Osmond opened up to Dr Oz about her struggles with bulimia and postpartum depression, and how she got through her son’s tragic suicide. (marriageequality / Flickr)

Marie was clearly a fan of Dr Oz, saying he was a “breath of fresh air in this world.” He spoke with Dr Oz about how open Marie has been with everyone, especially about her body image issues. Marie shared that she had struggled with her weight ever since she was just 9-years-old. She recorded her first number one record, “Paper Roses” when she was just 12-years-old, and started the Donny and Marie shows when she was just 14.

She coped with the stress of her schedule with food, and after the first season, one of the producers took her out into the parking lot and said she was an embarrassment to her family. He told her “if you don’t keep food out of your fat face” the show would be cancelled and more than 200 people would lose their jobs. He warned her that if she ever told her family what he said, he would deny it and call her a liar.

She believed him, knowing she had put weight on. At first she starved herself, but found it too exhausting so she became bulimic. She had a terrible relationship with food, saying that she was dealing with her emotions through food, not with her mind.

Marie further explained that because she was the only daughter, after her mom had a stroke, heart attack, and other health issues, she said to her “do not do what I did to my body.” She encouraged Marie to take care of herself and be there for her children, before telling her she loved her. Since then, Marie wants to show women that they deserve to take care of themselves.

Marie Osmond has eight kids and three grandchildren. She laughed saying that she loves grandchildren because she can spoil them and then give them back. Marie was open about struggling with severe postpartum depression. She revealed that she had no reason to get out of bed and everything seemed so dark. At one point, she handed her baby to the babysitter, gave her the credit cards and cash, said something is wrong with me, then got in the car and drove away. She admitted that she considered driving her car off a cliff five different times.

Marie added that in her mind, she knew it was a stupid thing to do, while in her heart that it felt right. She felt that everyone would be better off without her, which she claims is the biggest lie of depression. “There is nothing good in leaving anybody behind,” Marie stated. “If you are feeling that, please know that there will be light and get help.”

It was actually her mom who saved her from herself. Marie’s mom told her that after she had her last child, she also got into a car and drove away. “I made it through it and so will you,” her mom told her at the time.

Dr Oz then asked Marie about losing her 18-year-old son, which as easily the biggest tragedy of her life. Marie believes that she never would have related on the depth with her son, if she had not gone through postpartum depression. She said she was judged harshly for choosing to go back to work afterward, but it was the music that had always been there for her, throughout her life.

She added that she and Donny were supposed to be in Vegas for 6 weeks and they’re now in their eighth year. It makes sense that she titled her new CD “Music is Medicine.”

There’s no denying that Marie Osmond is one busy woman, and for her the biggest secret is not skipping breakfast. She’s been able to keep her weight off for nine years, and has been eating five times a day. One breakfast example is an egg with zucchini, onions, and feta cheese. She also really likes Greek yogurt with blueberries.

Marie also turns to aromatherapy a lot, particularly peppermint oil, to help her wake up.