Dr Oz: What Would You Do in an Uncomfortable Health Situation?

Dr. Oz decided to turn the cameras for an investigation into human nature. He wanted to see what people would do if they witnessed an uncomfortable health situation. Would you speak up and get involved or would you stay quiet and mind your own business? Dr. Oz says he was surprised to see how people reacted to certain situations when they thought nobody was watching.

Dr. Oz and his team took over a New York City diner and set up a scenario where a waitress offers unsolicited advice to an overweight customer who she thinks is ordering way too much unhealthy food. He also asked life coach Gabrielle Bernstein to be his eyes and ears as she looked on via hidden camera to see how other diners reacted to the waitress’s comments. 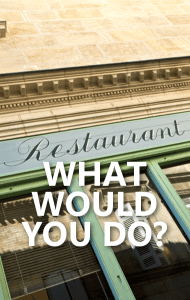 Dr Oz set up an experiment to see how diners would react to a fellow customer being insulted by her server.

Dr. Oz’s actresses replayed the same scene over and over again and while a few people spoke up and came to the customer’s defense, many just looked on and did nothing. One onlooker, however, was nearly brought to tears and not only did she look for a manager to speak to, but she also stepped in and told the waitress to back off.

Several diners admitted to being bothered by what they witnessed, but most were not sure what to do about it, which is why they chose to do nothing.

Gabrielle Bernstein tells Dr. Oz she was most surprised by how few people spoke up because she would have expected onlookers to come to the woman’s defense. Amy, who played the customer, admits to taking the insults personally after a while and what bothered her the most was nobody even looked her way until she got to the point of breaking down into tears. While she says she has experienced looks and comments in her “real” life, this was a frightening experience to take part in.

Jane, who played the waitress, says she was stunned by the fact that very few people came to Amy’s defense. She tells Dr. Oz she had to keep saying mean things to Amy until she started crying, which is finally when some people spoke up.

Dr Oz: Would You Speak Up for Someone?

Dr. Oz invited a few of the customers who witnessed the experiment to come and share their thoughts on what they say that day in the diner. One woman says she found it difficult to speak up because she did not want to bring more attention to Amy, who was already being forced into a spotlight by her rude waitress. Another woman, who is from Australia, says she and her friend initially thought this was “normal” behavior for New Yorkers, but once they began to see how distressed Amy was they knew they had to speak up and say something.

Gabrielle Bernstein, author of Miracles Now, says if you are ever in an uncomfortable situation it is important to go with your gut. If your intuition is telling you to speak up then she says to do it because you will probably feel regretful if you don’t. She also says that speaking up for someone else is a wonderful way to own your own voice and feel empowered for yourself. Gabrielle adds that if you do not want to put yourself in the line of fire you can do what one creative woman did and look for a manager because you are still speaking up without getting directly involved.