For the first time ever on the show, Shar Margolis and John Edward, two of the top psychic mediums, joined together to share their advice for communicating with the dead. At early ages, Shar and John both realized they had unusual yet powerful abilities. When John was just 15-years-old, a chance encounter with a psychic confirmed what John already knew: he could predict the future and communicate with the deceased.

John is a New York Times best-selling author and the host of a popular TV series. Shar has earned international fame and a decades-long following with her high-profile readings, crime investigation work, and book “Questions from Earth, Answers from Heaven.”

Char explained that the most important thing is love, and that’s the bridge between here and the spirit world. John explained that when he’s getting information, he sees it and feels it, rather than hearing a sort-of out-loud voice. He described it as an “energetic download.” He then passes on what he’s seeing, hearing, and feeling. 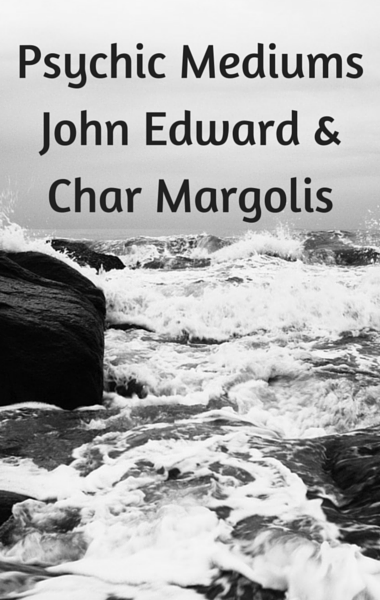 John Edward and Char Margolis used their incredible abilities to connect audience members with loved ones who have passed away. (sudhamshu / Flickr)

Dr Oz asked his audience how they felt about the afterlife, and 72% said they believe in one. But that means there were a lot of skeptics in the audience as well.

Dr Oz turned to a woman in the audience who admitted she was skeptical of the possibility that someone could communicate with the spirits or loved ones who have passed. Dr Oz admitted that he was skeptical as well, while John explained that being skeptical is okay because it’s still possible to have a conversation.

Dr Oz then asked Char and John to see what they were sensing from the audience, and gave them the open floor to do what they do best. Char immediately asked the skeptical woman and her friend to stand up. Char then told the woman she was seeing the letter M, correlating to a female family member that passed away, and then added that there was a R in the name as well. She correctly guessed that the woman’s name was Mary and it was her grandma, which caused the woman to giggle nervously.

Char then acknowledged that the woman was going through a recent breakup, which was correct, and said that Mary wanted her to know that the guy wasn’t the right one for her, and she knew it from the start. Char then sensed something from the initial J.O., which the woman acknowledged was her brother. She then admitted that she was beginning to believe a little more.

John then faced one section of the audience and said he was sensing a man who was an amputee or double amputee, or confined to a wheelchair. No one responded, even after he called out one woman specifically, but then a man in the front row explained that his grandfather, his mom’s dad, was paralyzed from a stroke. Because of a massive stroke to one side, he was unable to walk at all. John was picturing a weird-looking chair, saying that he was almost embarrassed by it.

The woman then explained that they would have to bring her dad’s chair to him in the living room to help him get around, and when John said he was sensing an R name, she shared that her name was Rosalie. John then said that he was seeing a young girl with the grandfather, with the initials DM, but the man and his mom shook their heads like they knew no one with those initials. He joked “I always say, you might want me to pee in the bowl, but I might hit the wall.”

Dr Oz: Connect With Those Who Have Passed

Char has truly helped people get more closure, allowing them to finally connect with people who have passed, sometimes when they weren’t even able to say goodbye. John explained that it’s important to have a strong foundation in faith, as well as trust that there is a higher power in order to listen differently. John explained that the divine presence talks to all of us if we listen. Shar said you need to let your mind go blank and trust the first thought that goes to your head.