Jennifer Groesbeck was traveling with her 18-month-old daughter Lily when their car suddenly veered off the road and into a river. Jennifer was reportedly killed on impact, and it wasn’t until 14 hours later that the upside-down, wrecked car was spotted by fisherman. Upon arriving at the scene, four officers claimed to have heard a voice calling for help. It was the voice that motivated the officers to work harder and faster, pushing the car up on its side. It was then, according to Officer Tyler Beddoes, that they could see there was one adult female who was “clearly deceased.”

There was actual bodycam video of Tyler calling out “we’re coming” as they reached the car and attempted to turn it over. Tyler explained that they heard the voice that sounded like it was coming from the car, and that’s what he was responding to. Once officers actually had access to the car, it was evident that the woman inside has been dead for hours, so they knew the voice hadn’t come from her. The officers were able to look into the backseat and see baby Lily upside down and at that point, submerged in water. Because she was an infant, unable to talk at the time, Tyler strongly believes it was an angel that they heard that day. 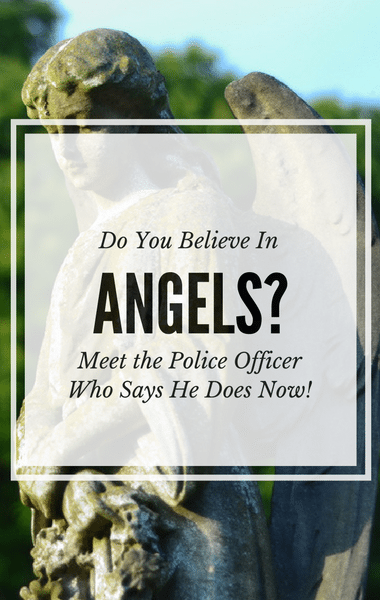 Do you believe in angels? Dr Oz spoke to three people who do, each for different reasons. (antongriffiths / Flickr)

When the officers got together later, they shared that they had all actually heard the voice. Miraculously, Lily survived, despite being in an unconscious state for those 14 hours. It’s that incident that inspired Tyler’s book “Proof of Angels.” Tyler revealed that the incident flipped his world upside down and gave him faith like never before.

Dr Oz then explained that Tyler’s experience wasn’t the first of its kind. It’s a phenomenon known as the “third man factor” and has been experienced throughout history. Incredible stories of survival go back as far as the days of the Bible. There have been hundreds of stories shared about angels offering protection and hope to people in life-threatening situations, guiding them toward survival.

According to Dr Oz, the best explanation for the “third man factor” happens in the brain. In an experiment, electric shock was applied to a part of the brain called the temporo-parietal junction. That’s the area responsible for organizing sensory imput. Every time the shock was applied, the subject would turn her head, feeling a presence over her shoulder. When the shock was turned off, she turned her head back and the presence was gone.

Scientists believe that those under extreme physical stress have access to the switch.

The feeling of presence has also been documented in patients with schizophrenia, epilepsy, and even healthy adults in a lab. But yet there are still people who encounter angels outside a lab, without physical duress. Gabrielle Bernstein and psychic medium Maryann DiMarco both believe in angels and joined Dr Oz to explain why. Maryann first explained that when she sees an angel, she sees them as pure light. She can look at someone and look into their energy, and the angels will come forward.

According to Gabrielle, angels exist to support, guide, and heal us. She claims to have been receiving connections to angels since she was a young child, particularly when she was depressed at the age of 16, and learned how to meditate.

Maryann loves skeptics, but doesn’t try to convince people that angels exist. Gabrielle believes that angels can help heal by encouraging and guiding through intuition.

Back to Tyler, he shared that he had been working as a police officer for ten years. He worked on a quadruple homicide where a father had killed his whole family. For Tyler, that was his “breaking point” and when he lost his faith. Despite the tragedy of Jennifer’s death, Lily’s rescue, survival and recovery changed everything for him. Dr Oz then took the time to thank Tyler for opening up about the life-changing experience.

Dr Oz: Reaching Out To Angels

Maryann revealed that some audience members had angels with them during the taping of the show. She explained that she would be drawn to someone and look at the energy around them, and then would explain why those angels were there that day. She headed up the stairs and pointed to one woman in particular, seeing archangel Michael around her, who offers a lot of protection. The woman revealed that her daughter was going off to school in Europe and she was struggling with a lot at work.

Dr Oz: How To Connect With Angels

Both Gabrielle and Maryann believe that anyone can connect with angels and be given the power to heal. The fist thing you have to do is establish a belief system, which means believing in something bigger than yourself. It doesn’t necessarily mean religion, but is something “more” than just us. Gabrielle stressed the importance of asking spirit questions, beginning with the words “thank you.” She liked the idea of “stream of consciousness writing” in which you write constantly, whatever comes to your mind. Maryann also shared that our voices tend to be very loud, whereas an angel’s is soft and coming from a place of love to nudge us in the right direction.

Gabrielle is a big believer in signs, and said you can always ask an angel for a sign that you’re on the right track. When you ask for a sign, you want to make sure it’s the first thing that comes to mind. Whatever it is that comes to your mind, will quite literally be everywhere as long as you’re looking for it. Then, turn those signs into action.