Heisman winner and Christian role-model Tim Tebow has accomplished major highs in his life, while also experiencing lows and heartbreak. He joined Dr Oz to share his advice on how to live your life with purpose, even when you seem to have no hope left. Tim recently wrote “Shaken” which was titled because of his realization that we all go through a point in our lives where we feel as if everything around us is shaken. “In those moments, what do we do? How do we handle it?” He stated. 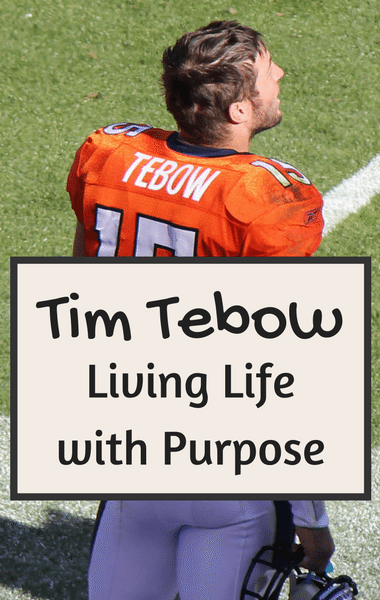 Tim Tebow joined Dr Oz to discuss his new book, his dad’s health, and how to live your life with purpose. (denverjeffrey / Flickr)

Tim Tebow has stated “it’s not just circumstances that define you, it’s your identity.” Tim explained that so many people are identified by their job or the relationship they’re in, and then feel lost once that’s taken from them. That’s why he encourages people to find an identity that is bigger than just what they do. If you find a bigger identity, you can find a bigger purpose.

One of the most iconic stories about Tim Tebow is from high school when he broke his leg during a football game and continued playing anyway. Because of that, Dr Oz was curious how Tim was able to allow faith to overcome whatever ailment he’s suffering from. He explained that he takes being a Christian into everything he does in his life, which gives him faith, hope, and love in everything in his life.

Tim’s father was recently diagnosed with Parkinson’s, which, according to Tim, has made him want to step back and spend more time with him. Because he doesn’t know how much time he has left with his dad, he’s hoping to fly him out to as many baseball games as possible, and more than anything, live up to the legacy that his father has left for him.

If Tim had a chance to say anything to his younger self, he would say that “you don’t have to live out the roller coaster that the rest of the world lives in your life.” He believes he’s grounded in so much more than his job, status, or whatever anyone may say about him.

He also believes that everything happens for a reason, recognizing that he had a lot of highs in college, that even though he had lows in the NFL, he had so many highs that it was worth it. The lows also provided inspiration for those who may be struggling in their own way.

As Dr Oz stated, the fact that Tim had haters, proves that he touched a nerve. As for what he would say to them, Tim would say nothing. For anyone who’s shaken, he wants them to know and understand that God loves them and they were created to do amazing things. Knowing that can give you peace and comfort, despite what job or relationship you may have.

Tim is now getting ready for Spring training with the Mets and has no plans of slowing down. So what does Tim eat to stay healthy? He follows a ketogenic diet, which means high fat, moderate protein, low carb, and a lot of vegetables. Less than 5% of what he eats every day is carbohydrates. He also eats 20% protein but will sometimes eat more if he’s trying to build muscle. Basically 75% of what Tim eats is fat, which may sound crazy, but “when you eat fat, you’re actually going to burn fat” because you have so few carbs and sugars in your diet.

One of the ways Tim loves to start his day is with bulletproof coffee. It serves as a meal replacement that’s high in fat and low in calories, just like the rest of his diet. He took black coffee, added heavy whipping cream, unsweetened almond milk, and butter. The butter prolongs the caffeine effect, which means it lasts longer in your body.

Would you be willing to try a diet so high in fat if it meant looking lean and healthy like Tim Tebow?