Dr Oz was thrilled to be joined by Tony Robbins, whom he called the most respected life coach on the planet. Dr Oz claimed that Tony has opened his mind to the reality that stress is really about fear. Tony was ready to help Oz viewers free themselves from stress and find financial freedom.

Tony began by sharing that his mom is a beautiful soul but she was addicted to alcohol and prescription drugs. When she was under the influence, she would become violent. He became a practical psychologist so he could learn how to manage her state emotionally and psychologically. He claims he is the man he is today because of what he went through. 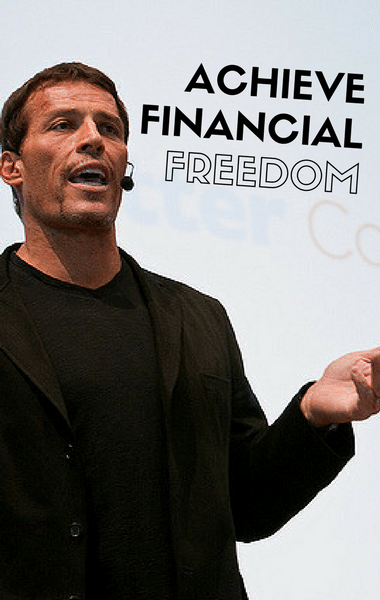 Tony Robbins joined Dr Oz to help his viewers better understand how they can achieve financial freedom no matter their situation. (stewtopia / Flickr)

All the proceeds of Robbins’ latest book “Unshakeable” are going to feed the hungry. As part of his research, he spoke to 50 of the world’s leading financial experts. The number one piece of advice they gave him was to stop being a consumer and become an owner. He became obsessed with helping people learn that anyone can become financially set if they understand compound interest. Essentially, compounding means putting a certain amount of money aside automated so you don’t see it, into an investment account.

As for those who are feeling particularly unstable in present times, Robbins wanted them to know even former President George W. Bush thinks all our worry is overblown. Even Nixon couldn’t crush America. Additionally, Bush told him he realized “the office is bigger than the occupant.” There’s three branches of government so even if the president screws things up, our country is going to be okay so there’s no reason to live in fear.

Then, Dr Oz spoke to Robbins’ about the idea that stress is actually fear. For most people, their biggest fear is being a failure. He shared that being angry or sad for just two minutes can suppress your immune system for up to six hours. Focusing on something you’re grateful for stimulates the immune system in a positive way. Positive thinking can truly go a long way! “You have to take control and make yourself happy,” Robbins stated.

Robbins continued to explain that in his latest book, he wanted to help give people the truth so that they could better prepare themselves financially. Every time the market crashes, it’s a great opportunity for financial growth. As Robbins’ put it, think of a stock market crash as a sale!

To find financial freedom, it’s most important to set something aside. It’s about investing, automating, and taking advantage of compound interest. Anyone can “get in the game,” you just have to know what the rules are.