Kirstie Alley has firsthand perspective on jumping back into the dating pool after a divorce. She shared her experiences with three single Chicago ladies who are ready to move forward after ending their relationships.

She brought out six little black dresses, which she said were cheap. They were in sizes 14 down to 4, and the point was that as she lost the weight, she could still look great in a dress that she felt good about wearing.

Kirstie suggested buying affordable clothes in a range of sizes, because being able to go down a size will keep you motivated to lose weight. 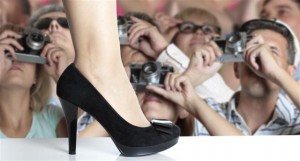 Kirstie Alley gave her perspective on dating after divorce and showed her Dancing with the Stars All Stars moves in a dance with Dr Oz.

Instead of going to a bar, Kirstie suggested shopping for dates at the grocery store, since everyone has to eat. She said you can size a man up by what’s in his cart. She said to avoid a guy with beer and bologna in his basket.

Instead, she pointed them toward guys with Arugula and Parmesan cheese, who could be right for you (or would be gay). Those were both ingredients on Kirstie’s Shopping List.

She also recommended flirting in the fruit department, which I think would make you look really desperate in real life. But showing off your sense of humor is never a bad tip.

Lastly, she instructed the women not to focus on their search for the perfect man. “I’ll bet you that the three of you have had more fun together than you ever had with a dude,” she said.

She said women together having fun will naturally attract positive attention from eligible guys. Kirstie said the three women were vibrant and cheerful, and could at least have a good time while they are single.

Dr Oz also surprised the ladies with six months of free coaching from Sarah Johnson at the American Council on Exercise. That should help the ladies get a great start on their path to fitness and health.

Sarah was in the audience, and she predicted great success for the trio of single ladies. Kirstie predicted boyfriends all around for the ladies in the future.

Kirstie Alley: Dancing with the Stars All Stars

Kirstie Alley tore it up during her season of Dancing with the Stars, coming in second. She is actually heading back for the show’s all-star season this fall on ABC.

But could Dr Oz keep up with her in the ballroom? To get the answer to that question, she took him for a spin around the studio, teaching him the steps to the salsa.

He was much more tenative than she, and I’m not totally convinced that all their moves were up to ballroom standards. They also tried the Pasa Doble, because Dr Oz said he didn’t know when he’d have the chance to dance with her again.