Who knew Steve Harvey had legs like that? If you didn’t see today’s episode of Ellen, you missed some great moments with the comedian, actor, TV star, and Think Like A Man author. Plus, he’s the man whose songs have been topping the charts for nearly a decade. Jason Mraz was back to sing his newest hit for Ellen DeGeneres and her audience. Check out these links for the full scoop on Ellen June 1 2012. 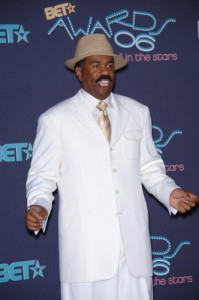 The man behind Think Like A Man, author & TV star Steve Harvey, shared his secrets with Ellen June 1 2012. (Featureflash/Shutterstock.com)

You’ve heard of Alcoholics Anonymous, and it spawned similar groups to support overeaters, drug addicts, and more. But could you ever imagine a Social Media Addicts Support Group? Ellen DeGeneres thinks that’s where we could be headed, and she shared some new research that found Twitter and Facebook to be seriously addictive.

If you were as successful as Steve Harvey, how would you want to celebrate your birthday? The Family Feud host and bestselling author told Ellen about his recent birthday getaway to Sin City. Find out what his wife, Marjorie Bridges, had to say about his weekend. Is it really true that what happens in Vegas stays in Vegas?

From the pages of his popular relationship advice book to an extended run at your favorite movie theater, Steve Harvey’s Think Like A Man is a total success. Find out what inspired him to share his wisdom about love and the differences between men and women. Learn why the comedian and TV host said he had nothing to lose.

Ellen: Jason Mraz ‘I Won’t Give Up’

Two-time Grammy winner and popular musician Jason Mraz has been growing his hair out. He returned to Ellen’s stage for a special performance of his latest hit, “I Won’t Give Up.” Find out how you can download the song and get his latest CD, Love Is A Four Letter Word. Will his summer tour be stopping in your city?

Ellen: Jason Mraz ‘I Won’t Give Up’ MP3 & Performance

You probably haven’t heard of Gabriel Mann if you haven’t been watching the addictive ABC series Revenge. He told Ellen why his big break on the show came at just the right time. Find out about his surprising Revenge character and the even more interesting vehicle the actor still drives to work.

You never know how you would truly react in an emergency until you’re faced with one. After an incident this spring, many are calling Michigan teen Austin Smith a hero after he lifted a car off his grandfather’s head and chest. Find out how this 15-year-old saved a life, and what Ellen did to reward his bravery.