Home > Health News
When you buy through our links, we may earn an affiliate commission. As an Amazon Associate we earn from qualifying purchases. Learn more.

The ongoing debate of whether BPA (Bisphenol A) is dangerous or safe in canned foods had me swearing off canned foods of any type, especially after this show on Dr Oz: Poison in Food Supply: Mercury, Pesticides & Bisephenol A BPA.  I must admit though that I have a weakness for canned green beans and canned peas.  The other canned vegetables, like corn for example, I can easily replace with their frozen vegetable counterpart (like frozen corn).  Maybe it reminds me of my childhood, but I sure do love my canned beans and peas!  Recently I was strolling through the grocery, and a can of peas was calling out to me.  I resisted the temptation, but decided to contact several canned food companies myself to see if I could find anyone who is not using BPA in their canned foods.  So far, none of the companies have replied to my inquiry other than Veg-All (a part of Allens, Inc.).  I am tremendously impressed with Veg-All!  Within a few hours of sending my e-mail, I received the following e-mail: 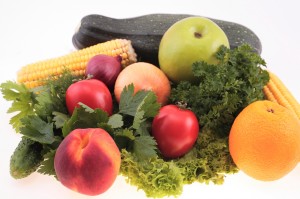 Thank you for your interest in our products and for taking the time to address your concerns about the use of BPA.  All of our can materials comply with all of the applicable current Code of Federal Regulations under the US Department of Agriculture and the Food and Drug Cosmetic Act for direct food contact.  Our cans are made out of steel materials that are lined with a coating that protects the food.  This food-grade coating does contain trace amounts of BPA.  BPA is a component that you will find presently in almost all food-grade can lining.  The food manufacturing industry as a whole is researching alternatives to BPA in these food-safe coatings.  Alternatives are currently being tested, however; few are being used presently because the non-BPA lining negatively impacts the flavor of the food.  Research is on-going in hopes of achieving a satisfactory alternative.  We hope that this information is helpful in addressing your concerns.

I was thrilled that Veg-All / Allens, Inc was so prompt in their response, however I was saddened that I did not discover a brand without BPA in their product.  It was nice to hear that they are working on finding an alternative to BPA, and it was also interesting to hear why they are using BPA in the first place.  I suppose that without the BPA lining, the canned food would taste metallic and be completely unappealing.  A few hours after receiving this first e-mail from Allens, they already sent me a follow-up e-mail (they really take customer satisfaction seriously – love them!).  Here is what Rick Allen from Veg-All said:

Good Afternoon Mrs. David.  We still are looking for a solution, but I wanted to send this along to you.

WASHINGTON, D.C. (June 1, 2010) — As part of its research commitment on bisphenol A
(BPA), Health Canada released today the results of a new survey of BPA exposure levels in a
variety of canned foods. The results from this latest government survey provide confirmation
that foods packaged in BPA epoxy resin coated metal cans do not pose a health risk.
Health Canada officials confirmed their previous conclusion “that current dietary exposure to
BPA through food packaging is not expected to pose a health risk to the general population,
including newborns and infants.” This same finding has been reaffirmed by other international
food regulatory agencies in the United States, Europe, the United Kingdom and Australia-New
Zealand.

“What is important about this latest survey from Health Canada is that once again, research
conducted by a well respected international body has shown that the minute levels of BPA in
canned foods do not represent any risk to consumers,” said Dr. John M. Rost, North American
Metal Packaging Alliance, Inc. (NAMPA) Chairman. “Equally important is that the U.S. Food
and Drug Administration has no record of food-borne illness from a failure of metal packaging in
more than 30 years, further testimony to BPA’s vital role in food safety. This fact, coupled with
today’s information from Health Canada, raises serious questions as to why various legislative
bodies continue to push for a ban on BPA use in food packaging.”

Canadian government researchers determined that all levels of BPA found in the over 70 tested
products were exceedingly low and all are well below the level established as safe for consumers
by the Canadian government. NAMPA welcomes the latest Health Canada study, noting that
these findings confirm industry’s own research that shows BPA levels in metal-packaged foods
are negligible.

The use of BPA in epoxy coatings in metal packaging provides real, important, and measurable
health benefits. The coatings allow for heat sterilization of the food, and reduce the potential for
the serious and often deadly effects from food-borne illnesses. Despite reports to the contrary,
the simple fact is there is no readily available, suitable alternative to BPA-based can coatings that
meets the essential safety and performance requirements for the broadest spectrum of foods now
packaged in metal containers.

What do you think about this press release?  Do you think BPA is really safe and we can go back to eating canned foods?  I have not made up my mind just yet, but I can tell you this, I am extremely impressed by Veg-All / Allens, Inc and my first can of canned vegetables (after my hiatus from canned foods due to concerns over BPA) will be a Veg-All can of sweet peas!