Can You Choose To Have A Boy Or A Girl?

Is it possible to choose the gender of your baby? Having a child can be a stressful process and if you’re putting all your hopes and dreams on having a boy baby or a girl baby, you might want to make sure that you have your desired outcome. Luckily, there’s a few different approaches to choosing a baby’s gender. Check them out below and good luck finding what you’re looking for! 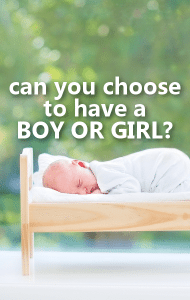 Can you choose to have a boy or a girl baby? (FamVeld / Shutterstock.com)

Let’s start with the free options. The Chinese Lunar Calendar, which has been around for 700 years, tells couples what specific conception dates will result in a boy or a girl. This system, of course, doesn’t have any science backing it up, but it is fun to think about and look at. And if you’re the superstitious kind, you might want to give it a try.

Okay, so you don’t want to spend the next nine months eating salty foods or splurging on cakes. I understand. But the bad news is that the most accurate scientific ways to choose gender cost tens of thousands of dollars. They also often involve invasive fertility treatments and fertility drugs with side effects.

But if you’re still on board after reading that, then you should know the scientific ways come from two existing fertility methods: artificial insemination and in vitro fertilization.

For in vitro fertilization, gender choosing comes down to a procedure called Preimplantation Genetic Diagnosis (PGD). With in vitro fertilization, a woman is given a round of fertility drugs to encourage egg growth in her uterus. The eggs are then extracted from her and inseminated outside of the body. Then the embryos are grown for 3 to 5 days and a cell is taken from each to test for gender. This is the same process many couples use to test for serious genetic disorders. But this test can also be used to detect gender. Then, the gender selected can be implanted. This procedure is almost 100 percent effective.

Then there’s MicroSort, which uses artificial insemination and runs on the premise that girl-producing sperm are bigger than boy-producing sperm. The sperm are sorted through a dye technique and only the sperm of the desired gender are used. This procedure, though, is only 88 percent effective.