How To Conceive A Boy

Want to have a boy? There are many reasons to want a boy baby over a girl baby. If you’re interested in having a boy, don’t worry. There are many different approaches to trying to choose gender to ensure you’ll have a boy baby, although some are a little bit more scientific than others. Check it out below! 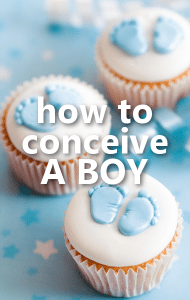 Want to conceive a boy? Don’t worry. There are several different methods to do that, some more scientific than others. (Ruth Black / Shutterstock.com)

There’s a long history of people wishing they could have a boy or a girl and wanting to have advance knowledge of what gender their baby would be. That’s why the Chinese Lunar Calendar was made 700 years ago to give parents a way to know. The calendar claims to give specific conception dates that will ensure you’ll have a boy or a girl. All you have to do is make sure to be intimate with your partner on the right day and presto, you’ll have a boy.

There’s only one problem: there’s no scientific evidence to back it up. People have been using it for hundreds of years, though, so there must be something to it to make it have such staying power.

Change Up Your Diet To Have a Boy

There has been some claims that if a woman eats a certain way in the few weeks leading up to conception, she’ll have a boy because it changes the pH balance of her body. All a woman has to do is eat plenty of “boyish” foods, which includes raisins, zucchini, salty foods, red meats, bread, fish, eggs, and sweet corn.

Change Position To Have a Boy

It’s said that if you conceive while standing up, rather than lying down, you’re more likely to have a boy. This one, too, might not have any fact backing it up, but it’s certainly a fun way to experiment!

Then, of course, there’s the expensive methods. In vitro fertilization and preimplantation genetic diagnosis cost thousands of dollars, but they do work. What this entails is the woman going on fertility drugs that cause her to produce lots of eggs, then the eggs are extracted, inseminated, grown to 3 to 5 day embryos, and tested for gender. Then the gender the mother desires is implanted back into her. This has a near 100 percent success rate, too, so if you really want a boy and have the money, it could work.

There’s also MicroSort, where the sperm is analyzed and, through a dye technique, the male- and female-producing sperm are separated. Then only the sperm of the desired gender is used and artificially inseminated into the mother. This procedure is nearly 90 percent effective, but it’s also expensive.