A woman named named Amy was backstage with headphones on, making it impossible for her to hear anything that was going on. Dr Oz then explained that, thanks to a simple DNA spit test, he was able to put together a reunion for Amy, with two sisters she never even knew she had. Just by testing your saliva, you can uncover information about your ancestry and whether you’re a carrier for medical conditions. But for Amy, her sample solved an unimaginable mystery. 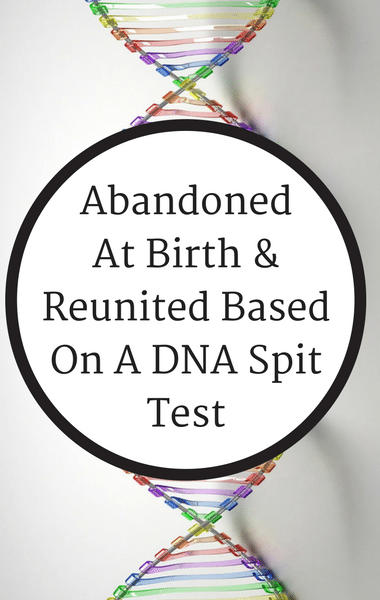 Dr Oz had the surprise of a lifetime for a woman who was abandoned in a phone booth when she was a newborn. ([email protected]/ Flickr)

Amy Cox grew up in Oklahoma and when she was six months old she was adopted. She had a normal, happy childhood, and grew up knowing she was adopted. When she was 18 she heard a rumor that she was left in a telephone booth at the Tulsa State Fairgrounds. At first she didn’t believe the story, but when she asked her adoptive mom, she learned it was true. That was the moment that began her journey to understand why.

Amy went to the library and began searching through old newspaper articles. She discovered an article about the day a baby was found abandoned in the phone booth. On June 12, 1978 someone called the police and told them they left a baby in the phone booth. The police decided to call the baby “Maybelle” after the location where she was found, and Amy knew the baby in the article just had to be her.

Amy joined Dr Oz and explained that she always felt like whoever left her in the phone booth, did so because they wanted to protect her or wanted something better for her. Amy started the search for her birth mother in 1996 but didn’t have a lot to work with, until a few years ago she heard about a woman who was abandoned in a Burger King and found her birth mother within days by using social media. Amy began using social media and her blog but come up empty so far.

Amy first started her search to find out why she was abandoned, but once she had kids of her own, three girls, she wanted to learn more about her family history. Amy turned to a company called 23 and Me for DNA testing. Amy received a kit in the mail and filled a test tube with 1/4 teaspoon of saliva. The sample was then sent to the 23 and Me lab, where Amy’s DNA was extracted from her saliva. The DNA was processed on a chip that could sort through hundreds of thousands of genetic variants to figure out Amy’s exact genetic makeup. Those variants are the small differences in our DNA that make us unique.

Amy waited for six weeks to find out what her DNA could tell her about who she was. Amy explained that she was born with a slight case of cerebral palsy and was legally blind, but both were corrected with surgery. She’s also had her gallbladder removed, so she’s had her fair share of medical conditions.

The first thing Amy learned was that she was Cuban and was matched to a distant cousin. She also learned she had two biological brothers and two biological sisters. Both her parents are deceased but she learned they were amazing parents to her siblings. She’s just a year and three months younger than one sister, and because she was the baby, she felt like maybe it was too much of a struggle for her parents, so they wanted to give her a better life.

Dr Oz then surprised Amy by telling her that her two sisters were there on the show, and then invited them to come out and meet her. It was an absolutely beautiful, tearful reunion for all three women. One of Amy’s sisters shared that they didn’t know a part of their lives was missing until they found out, but the reunion was what they had been dreaming about for six months. Amy was so grateful to how accepting and loving her siblings were from the very beginning, and they acknowledged that their parents were likely looking down on them smiling.

CeCe Moore, a DNA detective, explained that DNA has been an “incredible game changer.” She further explained that 23 and Me has what is called a “relative finding” or a “DNA sharing service” and if you opt in for that, they compare your DNA to everyone who’s already in the database. Based on how much DNA you share with those people, they predict the relationship. If you share 3% of your DNA, it will predict the person is your second cousin. Second cousins share great grandparents, so to find a person’s birth family, you can look at that person’s family tree and move forward in time to find someone “in the right place at the right time to be the birth family.”