Dr. Oz welcomed Dr. Sanjay Gupta to his show to talk about three big issues that he didn’t think we were paying enough attention to. One of the issues was Ebola, so apparently Dr. Gupta hasn’t been paying attention to the news for the past four months or so. But anyway, Dr. Gupta said he thought these issues can be fixed and that there’s a lot of misconceptions out there. He wanted to clear the air and make sure people know the truth about them. 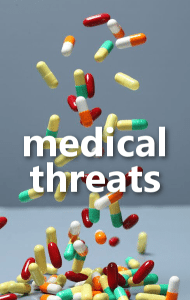 Dr. Oz talked to Dr. Sanjay Gupta about the rising threat of antibiotic resistance and super-bacteria. Are we safe?

The first issue is antibiotic resistance, which the World Health Organization said was the public health challenge for our entire planet. But Dr. Gupta said he thought this was a fixable problem. But currently, there are 20,000 people a year who die because there aren’t treatments for their infections due to antibiotic resistance.

Dr. Oz said this problem could take us to a “new medical dark age”. Dr. Oz explained that before antibiotics were discovered, people died from things like pneumonia and even small infections like a skinned knee. In the 1940s, we discovered antibiotics. In the years afterward, infections plummeted for decades.

But the bacteria has learned to adapt, which means we’re in an arms race against the bacteria. Because bacteria reproduces so quickly, they’re able to adapt quickly. There hasn’t been a new antibiotic discovered since the late 1980s. With more and more bacteria becoming resistant, we could be looking at a future where these deadly infections once again become common.

Dr. Gupta said this comes down to money. Pharmaceutical companies are less likely to invest if they can’t make money on something. But right now, experts are dredging the bottom of the North Sea looking for something that could be the next generation of antibiotics. Dr. Oz said that there are world leaders who say this issue is a bigger threat than terrorism.

Dr. Oz: Dementia in the Brain

Dr. Gupta talked about dementia as well. He brought his own brains for a visual aid. Dr. Gupta explained that when someone has dementia, the folds in their brain get bigger and the temporal lobe starts to shrink. He also showed some brain scans, including a normal brain, a brain with mild cognitive impairment, and a brain from someone with Alzheimer’s Disease. Dr. Gupta explained that some people think that if their parents had dementia, they’ll get it. That’s not necessarily true.

Dr. Oz: How to Lower Your Risk of Dementia

Dr. Gupta also said if you do games to keep your brain sharp and keep away dementia, it might not work the way you want. It’s not a bad thing, but it’s only practicing one specific area of the brain. Instead, Dr. Gupta said you should get dressed in the morning with your eyes closed. He also recommended singing a lot, because it works out your brain. You have to recall the lyrics and remember how to do it in tune. This activates both parts of the brain. If you add a rhythm part, you’ll also work out your cerebellum.

In India, there’s much lower instances of dementia. One of the reasons researchers have discovered is tumeric. Take 1 cup of almond milk, 1 teaspoon of cinnamon, 1 teaspoon honey, and 1/2 teaspoon of tumeric and mix it together with a little fresh ginger. This is usually served warm. Dr. Gupta said this is really relaxing and can help reduce your risk for dementia.

Dr. Oz also asked Dr. Sanjay Gupta to clarify whether Ebola is airborne. Dr. Gupta said it is not airborne, but since Dr. Oz’s confusion seemed to surround sneezing, Dr. Gupta explained that if someone with Ebola sneezes into your mouth, you might get Ebola. But if someone sneezes a few feet away, you’re okay. If Ebola was airborne, the numbers for this disease would be a lot worse.